After Vietnam halted rice exports, Thailand pushed its export prices up, but now Vietnamese exporters are preparing to return to the world market.

Thailand on April 2 offered 5 percent broken rice at $550 per ton, an increase of $82 per ton compared with March 24, the time when Vietnam announced the suspension of rice export. 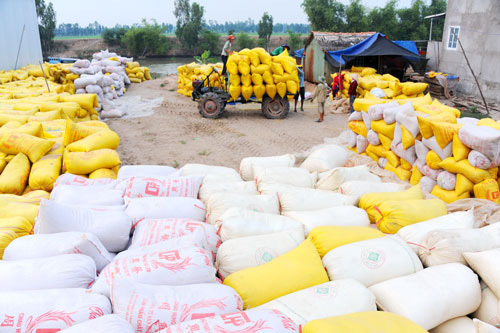 Nguyen Dinh Bich, a respected trade expert, said Thailand is now the ‘only buyer in the market’, so it is understandable why it has pushed the price up.

The rice price is on the rise, but the current factors show that the price will not skyrocket because demand is stable.

The latest report of the US Department of Agriculture showed that this year’s rice output doesn’t decrease, the inventories in countries remain high and the world’s demand doesn’t increase sharply.

If the epidemic lasts a long time, some markets which now buy low-cost rice may have to shift to cheaper food, such as cassava and corn. Thus, rice demand will decrease.

In general, Vietnam’s rice is $50-60 per ton cheaper than Thailand’s. However, in the first months of the year, Vietnam’s price was very close to Thailand’s. If Vietnam halts rice exports for a long time, enterprises which have a high inventory level will not buy more rice. If so, the rice price will fall.

Domestic rice demand has increased amid COVID-19. However, the increase is small compared with the rice excess.

The Ministry of Industry and Trade (MOIT) has increased hundreds of thousands of tons for stock, so there is no need to worry about rice shortage. He has reassured the public that despite the drought and saline intrusion in Mekong Delta, the yield is still very high.

“So, the government should resume rice export,” Binh said.

Nguyen Van Thanh, director of Phuoc Thanh IV Production and Trade in Vinh Long province, said about 200,000 tons of rice have been affected by the rice export suspension decision, which has caused serious losses.

The Philippines was the biggest importer of Vietnam’s rice in the first two months of the year, which consumed 35.9 percent of total rice exports. Meanwhile, China, Taiwan and Mozambique saw the sharpest increases of imports from Vietnam.

The Ministry of Industry and Trade (MoIT) has asked the Government to resume rice exports. However, the export volume would be limited at 800,000 tonnes for April and May.

PM: rice exports must be controlled to ensure food security

Prime Minister Nguyen Xuan Phuc has said that in the current situation, rice exports should be controlled to ensure food security in line with the Government’s Decree No.107.