VietNamNet Bridge - In fact, about 20 years ago, many tour operators discovered the tourism resources on the Saigon River. But let's return to reality. 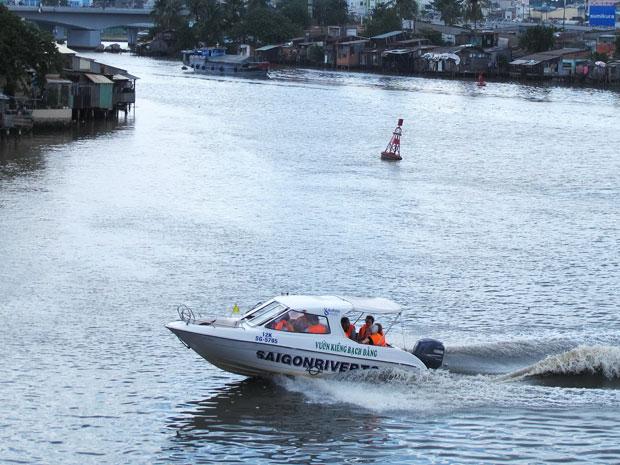 Saigon, a look from the river

At 7 am on a Saturday. Mrs. Elisabeth Ngondara Olivry (French) and her husband cautiously crossed the busy road in front of the Majestic hotel to go to a pontoon to join a river trip on the Saigon River.

After checking at the ticket counter, Elisabeth and her husband were warmly welcomed by the staff of the Saigon River Express boat on board. Other passengers included Mr. Graham Taylor, an Australian and three young American.

The boat staff gave them lifejackets and the breakfast was served on boat, with bread, bottled water and some native fruits like bananas, Bon Bon, rambutan...

The boat sped up, leaving the city with high-rise buildings behind. Elisabeth and her husband sat at the prow to enjoy the early sunlight. She said: "The villages along the river are fresh and peaceful. I used to try a canoe tour in Bangkok, but the river there did not make me feel to be close to nature as the tour on the Saigon River does."

"Why do you choose the river tour to explore the city but nothing else?" "This tour was recommended by the hotel receptionist. We also know that this city has many rivers and canals so it would have been a mistake if we did not choose this tour to learn more about Saigon," Elisabeth said.

Unlike the French couple, Graham Taylor, a retired teacher from Australia who had to walk with crutches, chose this tour because his friend, a reporter of the Saigon Times Daily recommended it. Taylor said his condition could not allow him to get into the Cu Chi tunnels, but lying on the stem of a boat to see the scene on and along the river and breathe fresh air are indescribable.

Inside the boat, the group of young Americans enjoyed fruit and took pictures.

Waterway tours are outstanding products which have brought about significant revenue for travel companies that focused on city tours in the last over ten years. However, according to our survey at the ticket counter of some travel companies, there are not many choices for tourists.

Among Saigon River tours, visitors often choose the two midrange tours, which have been very familiar with tourists for decades: Sai Gon - Cu Chi and Saigon - Vam Sat, with the travel time of 4-6 hours, the price from VND1.7 to VND2.2 million ($70-110).

"The time and the price are reasonable while visitors can learn more about the history, culture, and nature of Saigon," Nhat Hai, a tour guide of Exptissmo explained. Hai added that each week he had three or four Saigon-Cu Chi or Saigon-Vam Sat tours.

However, river tours are only favored by foreign tourists. In the first month after the city launched the strategy to develop river-way tourism (June 4 to July 3, 2013), Saigontourist had 231 tourists and 80 percent of them were foreigners.

Of the six river tours, visitors still selected two "traditional" tours that have been offered for decades – Saigon-Cu Chi and Saigon-Vam Sat.

Waiting for the better days 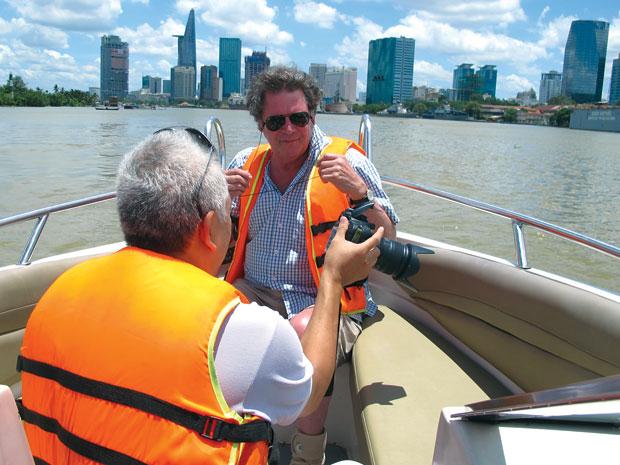 “18 years ago, when I was a tour guide of the Youth Travel, I dreamed of tours on the Saigon River. At that time, my company purchased a 25m boat with 50 seats to serve tourists on the Saigon - Cu Chi route. When the tour was just launched, it attracted a lot of foreign tourists but after several trips, we did not have enough passengers and the river tour was then canceled," said Mr. Tran The Dung, who is now deputy director of the Young Generation Travel Company.

In fact, about 20 years ago, many tour operators discovered the tourism resources on the Saigon River. But let's return to reality.

Bach Dang Wharf, the starting point of most of tours on the Saigon River for decades, is not invested properly to be a tourist wharf. As a tourist port, Bach Dang Wharf does not have a parking lot. Foreign tourists have to cross a busy road to enter the wharf.

The wharf is small and does not have enough space for boats. Mr. An Son Lam, director of Indochina Sails, said that his company had to invest VND2 billion ($100,000) to build a pontoon bridge to serve the company’s 10 boats. The boats of other companies have to temporarily anchor in Thu Thiem.

Mr. Hoang Cam Giang, who is in charge of the river tours of Saigontourist added that restrictions on anchoring space is one of the reasons hindering the development of river tourism in the city.

Giang said of the six river tours launched in June, after one month, one route to Phu My Hung was canceled just because of lacking a wharf in Phu My Hung.

Another problem comes from the old bridges of Binh Loi, Long Phu, Rach Ong and Dan Xay. These bridges hinder the operation of big boats. As a result, travel firms can only organize tours for small groups of tourists of less than 25 people. Mr. Tran The Dung, deputy director of the the Young Generation Travel said the cost of small tours like this is high, so river tours are only suitable for foreign tourists.

But why inner-city tours, with low prices, do not attract tourists? The cruise ticket for the tour from Bach Dang wharf to Binh Dong is only VND300,000 ($14) and it is only $10 for the tours to Thi Nghe and Nhieu Loc canals.

A tour guide explained by personal experience: "The tour to Tau Hu canal is very interesting but on the day the tide ebbs away, the section from Ben Nghe to Tau Hu is a dark, fetid canal.

Mr. Cam Giang from Saigontourist added that the best tour to introduce the history, culture and the development of Saigon is the Bach Dang-Cho Lon route but it is important to re-create the floating market, maintain old houses along the river and build a wharf to the commercial area of the Chinese community.

“Besides water pollution and insufficient infrastructure, another problem is the lack of fascinating stopovers along the route," Giang added.