The total electricity output provided by the power works was 1.15 billion kwh. 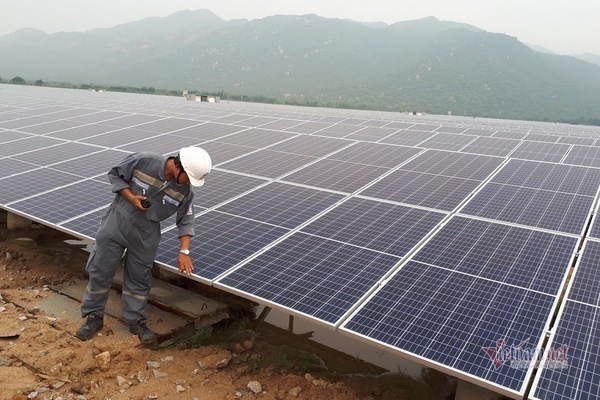 December 31 was the final day the FIT (feed in tariff) price mechanism was still valid. The electricity price at which the Electricity of Vietnam (EVN) will buy from solar power project developers after that day remains unclear.

This is why investors rushed to put their projects into operation before the deadline.

Just within three days, from December 29 to December 31, more than 3,000 MW worth of rooftop solar power belonging to 10,000 projects became operational.

Ha Dang Son, director of the Centre for Energy and Green Growth Research, noted that after one year, the 2019-2025 ‘rooftop solar power race’ exceeded the target of 1,000 MWp set for the entire period.

The target of installing 100,000 power systems with total capacity of grid-connected rooftop solar power of 9,300 MWp, equal to the capacity of operational ground-mounted solar power projects, was exceeded.

Son cited an EVN report as saying that the total installed solar power capacity is 19,400 MWp, or 16,500 MWac.

As such, Vietnam has surpassed Germany in the proportion of solar power in total electricity capacity (16.5/60 GW vs 51.5/211 GW), and it is No 1 in ASEAN in total renewable capacity (wind and solar power).

One report said that the total electricity output provided by solar power works to the national grid in 2020 was 10.6 billion kwh, including 1.16 billion kwh from rooftop solar power, accounting for 4.3 percent of total output mobilized from all sources of the national system.

According to EVN, difficulties exist in the electricity system when the solar power proportion is high.

The typical characteristic of solar power is that electricity generation depends on the sunny hours of the day. The electricity is abundant from 10 am to 2 pm, especially on weekends and holidays because the additional charge decreases at this time, while solar radiation is the strongest during the day.

In peak hours, from 5.30 to 6.30 pm, when the demand is the highest, solar power works cannot generate enough electricity.

In order to ensure stable electricity supply, it is always necessary to maintain a number of traditional electricity generation units.

The difference between the peak capacity in holidays and ordinary days is up to 5,000 MW. On weekends and holidays, the Electricity Regulatory Authority has warned that it is impossible to mobilize all the usable capacity of electricity generation sources, including renewable power sources (solar and wind power) during off-peak hours, weekends and holidays.

This means that a lot of solar power projects, including rooftop power and wind power, won’t be able to provide all of their capacity to the national grid.

Son said a question has been raised about what Vietnam will do in the next five years. Will Vietnam continue to see a solar power boom, or will it go more slowly to have time to deal with technical problems, such as technical criteria, waste solar panel treatment and better programming for national power development?

In the latest move, EVN released a notice on the development of rooftop solar power after December 31, 2020.

Power companies have stopped receiving and dealing with requests on connecting the national grid and signing contracts on buying/selling electricity from rooftop solar power works developed after December 31, 2020 until there is a new guideline from appropriate agencies.

The Electricity and Renewable Energy Department under the Ministry of Industry and Trade (MOIT) is coordinating with consulting agencies to study the scale of rooftop solar power projects and the price of electricity generated from these projects.