HCM City residents in many areas are complaining about the stench allegedly coming from waste treatment plants and waste collection stations.

Him Lam Phu An apartment residents in Long Phuoc ward in district 9 in HCMC have hung banners at their apartments to protest pollution caused by the Thuy Loi garbage transfer station, and the smoke and noise from Xuan Duc paper plant, next to the apartment. 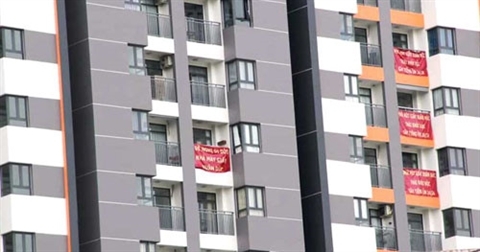 Him Lam Phu An residents hang banners to protest pollution

A representative of Him Lam Land said since the Thuy Loi waste transshipment center is overloaded, the waste sometimes spills out into the street leaving no way for people to pass by.

He confirmed that the company has returned 55 apartments from the buyers who said they could not bear the bad odor, noise and smoke and refunded the money to them.

For the last few years, residents in Nam Sai Gon area have struggled with the bad odor supposedly coming from the Da Phuoc landfill.

Nguyen Quan from Riverside Residence in Phu My Hung Urban Area told reporters that his family had lived for many years in the central area of HCMC where they suffered from noise and dust. They decided to buy an apartment at Riverside Residence one year ago at VND6 billion.

“I thought this would be a place with fresh air, quiet space for me to enjoy my old age. Since I moved there, I have been suffering from the bad odor from Da Phuoc landfill,” he complained.

Quan said the apartment is well decorated, but he sometimes doesn’t want to return home because of the stench. When he is at home, he close all the doors and windows.

Tran Hoang Trung at Grandview in district 7 also complained that his family’s life has been upset over the last three years.

“The stench mostly appears in rainy season and at night. It comes three times every week, from 9.30 pm to 1 am the next morning,” he said. “We have to close doors tightly, turn on the air conditioner and burn aromatic oils. ”

Several days ago, people at Tin Phong residential quarter in district 12 put up banners to protest a waste pressing station near the quarter.

Le Hong Thu, 72, said she ‘ran away’ from the apartment in district 7 near the stench from Da Phuoc landfill. Now she has heard about a garbage pressing station near Tin Phong.

“I have jumped out of the frying pan into the fire,” she said.

The machine can filter air on streets and can even prevent fine dust, which is dangerous to human health.