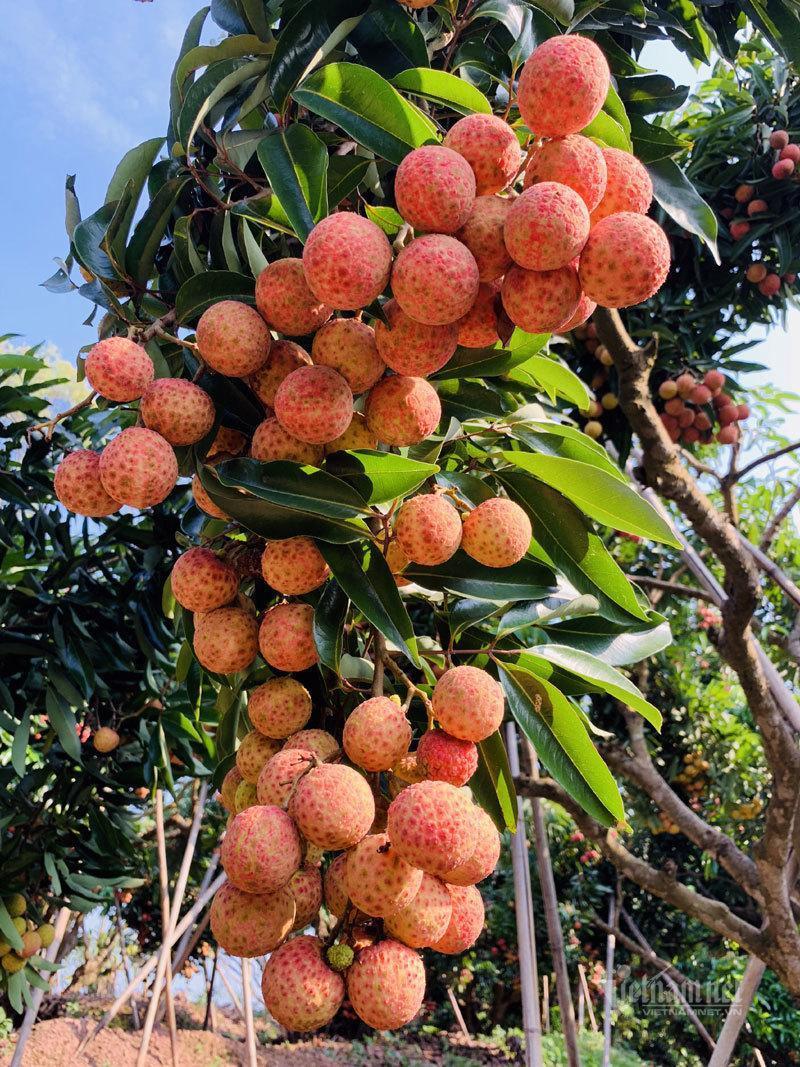 Reporters were received recently by his wife Truong Thi Bay, who said her husband had left to invite relatives to a big party of their family.

“The high harvesting season will come in one week. All the first-class litchis in the garden have been sold to merchants and businesses,” she said.

The family began farming litchis in 1991. They experienced very tough days when they only had spare meals with cassava, rice and corn porridge.

They leveled a hill for growing litchis. Farmers at that time did not know farming techniques or how to properly cultivate crops to obtain high yields.

At first, the litchi output in Luc Ngan district was small, so the litchis could go for good prices. Later, the growing area increased, farmers had more cultivation experience, and the yield was higher. The prices went down because of oversupply.

Bay and her husband harvested the litchis and carried them to the market for sale. One kilogram of litchis sold for only several thousand dong.

The litchi prices at times went down so dramatically that local farmers sold litchis per large baskets, not per kilogram. A basket of 100 kilograms sold for VND100,000, just high enough for farmers to buy petrol to run their motorbikes, leaving no profit.

Many households were discouraged so they chopped down litchi trees to grow other crops.

Bay and her husband did not fell the trees as they were the main source of income, and they did not know what to grow next.

“One day, my husband realized that the canopies of litchi trees had developed too rapidly, thus causing shade which made pests thrive. He decided to use a knife to fell some small branches to give more light to the garden. Surprisingly, a lot of new buds sprouted on the stem, and then bloomed and bore fruit. More surprisingly, the rate of fruiting on the stem was very high. And the quality of litchis was by far higher than the litchis on the top of trees,” she recalled.

The discovery prompted her husband to upgrade all of their litchi gardens. They were worried about the plan for fear for failure. However, they finally decided to go ahead, because they believed that if they did not innovate, they would have to sell litchis at a cheap price.

“I felt so worried when the tops were cut and there were only branches and roots left,” she recalled. “We were doing while learning. At first, we applied the technique with one garden, and then two gardens. Later, we renovated all of our orchards."

Their great efforts were rewarded. In the last 10 years, they have had bountiful litchi crops. Their litchis have high quality and look good. Each tree produces 40-50 kilograms from stems, and 70-80 kilograms from treetops. Some trees even give 1,800 kilograms of fruit.

Their litchis sell for prices that are 50 percent higher than the average prices.

When Hanh got home, he asked if the guests had ever tasted organic litchis.

“Organic litchis are ripening and now good enough to eat,” he said.

Bay began growing organic litchis in 2019 in cooperation with an enterprise. He follows a cultivation process which is even stricter than VietGAP (Vietnamese Good Agricultural Practices), and can only use a certain kind of organic fertilizer and plant protection products.

The cultivation process is written down in a detailed diary. In addition, there are cameras in his garden that help supervise the process from caring to harvesting. The products are provided with labels and QR Codes which allow customers to verify them with their smartphones.

Last year, Hanh sold 3 tons of organic litchis to enterprises. The products were then sold at VND200,000 per box of 12 litchis, or VND17,000 per litchi and VND600,000 per kilogram. This is the highest priced litchi in Vietnam.

“Litchis went for good prices last year. A basket of litchis could bring enough money to buy rice for half a year,” she said.

Though hail earlier this year may affect the output, Hanh estimates that he can harvest

20 tons of litchis this year. He estimates that he can earn VND800-900 million this year.

According to the Ministry of Agriculture and Rural Development, litchis have been exported to 30 countries.

Bac Giang’s litchi has been granted a geographical indication certificate in Japan, a choosy market with strict requirements on food safety and hygiene standards.