An 11-year-old boy from Thanh Hoa province was taken recently to E Hospital in Hanoi because his family was concerned about his abnormal height and long fingers and toes, as well as a protruding chest. 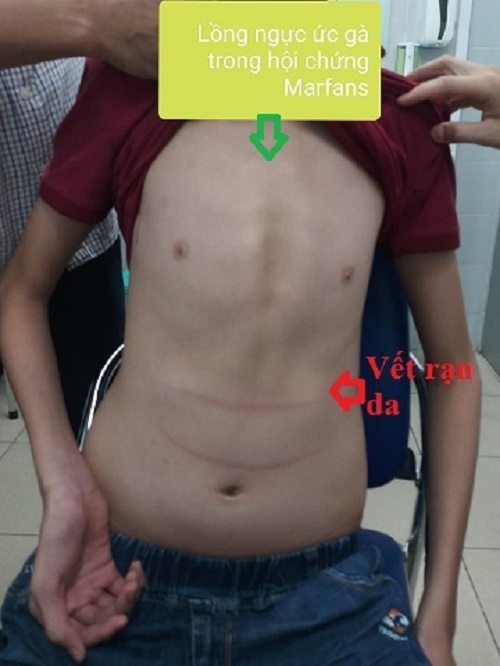 The mother of the boy said he was healthy, but his limbs and height had grown at an abnormal rate. No other members in the family were that tall.

Dr Nguyen Dinh Lien, head of the Kidney Surgery – Urology and Andrology at E Hospital in Hanoi, said after the examination that the boy suffered from Marfan syndrome, a genetic disorder that affects connective tissue.

A full body X-ray and DNA test to detect damages in the FBN1 gene segment confirmed that the boy had this syndrome.

According to Lien, Marfan syndrome may affect many organs of the body, including heart, eyes, lung, blood vessels, ligaments and bones.

The typical manifestation of the syndrome is a tall and thin body, but there is no proportionality in the length and shape of the upper and lower limbs, hands, fingers or feet and toes.

The bones and joints are also commonly affected. The sternum is protruding or recessed, while the spine is arched, feet are flat, the palate is arched and high, and teeth are thick. In addition, patients often have impaired vision.

The syndrome may also affect the nervous system and respiratory organs.

Lien stressed that the symptoms of Marfan syndrome vary among people, including members of the same families. Some people are affected slightly, while others have life-threatening complications. In most cases, the disease tends to worsen with age.

Marfan patients' health often deteriorates with age and the disease progression depends on the damage to organs.

The damage to the cardiovascular system and aorta can be life threatening. If cardiovascular effects occur, patients need to be treated according to a regimen prescribed by cardiologists.

When there is damage to the valve system and large blood vessels, patients will need intervention from the Department of Diagnostic Imaging or surgery.

In the case of the 11-year old boy, to prevent progression of the disease, Lien said he should not choose careers or play sports that require much effort. He will also have to have periodic examinations.

Former US President Abraham Lincoln, the tallest ever president and French President Charles de Gaulle both had Marfan syndrome.

Residents in the No 4 quarter in Linh Trung Ward in HCM City’s Thu Duc District take pride in their community by cleaning up the local environment and recycling products as part of a successful community-based model.