On some roads such as Nguyen Van Cu, Tran Hung Dao, 25/4, and the area at the foot of Bai Chay bridge and roads around local markets, garbage is dumped into large piles.

People in these areas said that in recent days, environmental sanitation workers have not come to collect garbage. People throw garbage on the road and when the volume of garbage is large enough, someone will come and take it away.

An environmental sanitation worker said that they were only asked to collect garbage and dump it at the collection point. Then, they covered the garbage with canvas pieces because the garbage truck didn't come for a few days.

At the foot of Bai Chay bridge, garbage is piled up along the road.

However, in order to transport garbage to the temporary garbage pit, Judenco has to use the facilities at the solid waste treatment center managed by Indevco. Indevco has not allowed Judenco to transport waste through its land as of August 1, resulting in the above situation.

It is estimated that every day people in Ha Long city discharge 300 tons of waste and about 200 tons of garbage comes from Cam Pha city.

On August 5, the People's Committee of Quang Ninh province directed Ha Long and Cam Pha cities to urgently collect garbage in the area to the collection point. The two cities were also asked to have a long-term plan for waste collection and treatment.

Photos of garbage piled up in Ha Long City on August 5: 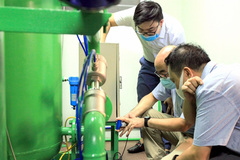