How interchangeable parts revolutionised the way things are made 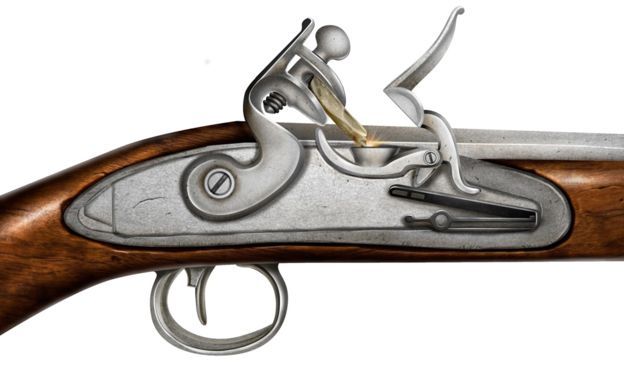 One sweltering afternoon in July 1785, officials, dignitaries and a few infuriated gunsmiths gathered at the Château de Vincennes, a splendid castle to the east of Paris.

They were there to see the demonstration of a new type of flintlock musket designed by Honoré Blanc, a gunsmith from Avignon so despised by his fellow makers, that he had been holed away in the dungeons of the château for his own protection.

Down in the cool of the castle cellars, Monsieur Blanc produced 50 locks - the lock being the firing mechanism at the heart of a flintlock weapon.

Briskly he took apart half of them and, with the insouciance for which the French are famous, he tossed their component parts into boxes.

Like a master of ceremonies ostentatiously agitating an urn full of numbered lottery balls, Monsieur Blanc shook these boxes to mix their components together. Then he calmly pulled out the parts at random and began to reassemble them into flintlocks.

What was he thinking?

Everyone present knew that each hand-crafted gun was unique. You couldn't just jam a part from one gun into another and expect either to work. But they did. Blanc had taken enormous pains to ensure that all the parts were precisely the same.

It was a spectacular demonstration of the power of interchangeable parts.

The implications weren't lost on one of the visiting dignitaries: the emissary to France - and the future president - of the fledgling nation of the United States of America, Thomas Jefferson.

Jefferson excitedly wrote to US Foreign Secretary John Jay: "An improvement is made here in the construction of the musket which it may be interesting to Congress to know. It consists in the making every part of them so exactly alike that what belongs to any one may be used for every one musket in the magazine.

"I put several together myself taking pieces at hazard as they came to hand, and they fitted in the most perfect manner. The advantages of this, when arms need repair, are evident."

But perhaps those assets were not as clear as he thought, since Jefferson struggled to get his colleagues to embrace the idea.

So what exactly were the "evident" advantages of this system? Jefferson focused on the problem of battlefield repair, a task requiring complex equipment and hours of skilled labour.

But under Blanc's system, only a few minutes and some rudimentary skill would be required to unscrew the musket, replace the faulty part with an identical component, and screw it all back together, good as new.

No wonder Blanc's fellow gunsmiths were worried about the future of their profession. And no wonder Thomas Jefferson was so interested in the problem of repairing broken guns.

While Jefferson battled to win support, Blanc was struggling too: it was impossibly expensive to hand-craft each piece to the precision required to make the system work.

The solution already existed, if only Blanc had grasped it. It would not only allow the swift repair of broken weapons, but a revolution in the world economy.

A decade prior to Blanc's demonstration, a metal worker nicknamed John "Iron-Mad" Wilkinson had become well-known in Shropshire - on the border between England and Wales. He was famous for his iron boat, iron pulpit, iron desk - and even iron coffin, which he liked to burst out of to surprise visitors.

In fact, he deserves far more fame for inventing, in 1774, a method of boring a hole into a cannon-shaped lump of iron so that it was straight and true every single time.

That was militarily invaluable. But Iron-Mad Wilkinson hadn't finished.

A few years later, he ordered one of those new-fangled steam engines from a neighbouring business.

But they had trouble making it work. The piston cylinder, formed of hand-beaten panels of metal, didn't have a perfectly circular cross section and so steam leaked out everywhere around the piston head.

Give it here, said John Wilkinson, and used his cannon-boring method to make a pleasingly round piston cylinder.

Wilkinson and Watt weren't worried about interchangeable parts, as such. They wanted cannonballs to fit into cannons, and pistons to fit into cylinders.

But the engineering problem they were solving also held the key to the interchangeability that Blanc prized, but was finding it expensive to achieve.

Wilkinson had built a machine tool - a tool that automates a manufacturing process.

It comprised a very sharp drill, a water-mill, and a system of clamping one thing while smoothly rotating another.

But as Simon Winchester observes in his history of precision engineering, Exactly, these machine tools had a curious side-effect: they put skilled craftsmen out of work in large numbers.

Monsieur Blanc's fellow gunsmiths had been worried that they would lose out on lucrative repair work. But they were about to lose manufacturing jobs, too.

Not only were machine tools better than hand tools, they also didn't require hands to wield them.

There was a second unlooked-for consequence.

If you could use machine tools to produce perfectly precise interchangeable parts, that not only made for simple battlefield repair - as Jefferson had seen - but it also made the process of assembly simpler and more predictable.

The economist Adam Smith's famous description of a pin factory, nine years before Blanc's demonstration, depicted each worker adding a step to what had come before.

But with interchangeable parts, such a production line could become a far quicker, more predictable and more automated process.

Across the Atlantic, the Americans had finally started to listen to Thomas Jefferson.

The promise he had identified was eventually realised at an armoury at Harper's Ferry in Virginia. In the 1820s, it began to produce, in Winchester's words, "the first truly mechanically-produced production line objects made anywhere".

As Blanc had always intended, they were guns: lock, stock, and barrel.

It was the beginning of what became known as "the American system" of manufacturing, and which produced Isaac Singer's sewing machines, Cyrus McCormick's reapers and harvesters, and - about a century later - Henry Ford's Model T.

Ford was a champion of interchangeability, and the Model T production line would have been inconceivable without precisely-machined interchangeable parts.

As for poor Honoré Blanc, he was undone by the French Revolution of 1789 - his dungeon workshop sacked by a mob, his political support guillotined.

He struggled on, hopelessly in debt.

Blanc may have given birth to an economic revolution, but thanks to a revolution of a very different kind, he never saw his own ideas take shape. BBC