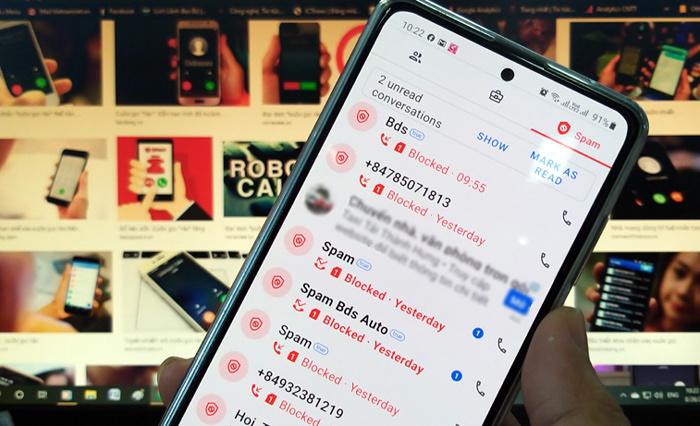 Noting that spam and fake calls are a burning issue globally, the agencies said they had been emerging more recently in Vietnam. The agencies are taking measures to prevent them.

The prevention of spam calls is being implemented by telcos with a 4-step process – detecting subscribers suspected of dispersing spam calls; verifying if these are spam calls; preventing the calls; and taking care of customers and dealing with complaints from customers.

Mobile network operators have been gaining satisfactory results. Since July, they have blocked the outgoing traffic of 34,700 subscribers. The figure was 16,288 subscribers in September alone.

Asked why spam calls still exist, the representative from the Telecommunications Authority attributed it to the people’s lack of cooperation with mobile network operators.

To authenticate spam calls, mobile network operators send messages or call people to ask them to confirm if the calls are spam. However, the percentage of people cooperating is low, just 5-7 percent.

To solve the problem, the Telecommunications Authority and telcos have been running campaigns to persuade people to become more cooperative.

To date, spam call prevention has been implemented by mobile network operators in coordination with the watchdog agency with technical measures in accordance with the Law on Customer Right Protection. When Decree 91/2020 takes effect on October 1, there will be an additional mechanism to prevent spam calls.

The Telecommunications Authority has released good news that the proportion of people answering the calls from strange phone numbers has dropped from 40 percent in June and July to below 10 percent. The reports on fake calls to the police have also decreased by 70 percent. This is because telcos each month send messages to subscribers and remind them to be wary of fake calls.

The Decree 91 on preventing and fighting against spam messages, e-mails and calls stipulates the building of a national database of names of subscribers refusing all ads (National Do not call-DNC).