He has now once again attracted public attention with a dance calling for the protection of the pangolin, an endangered wild animal.

Choreographer Quang Dang once again thrills the audience with a dance calling for the protection of the pangolin. He and his apprentice Minh Quan dance dressed in pangolin costumes in order to raise awareness about wildlife protection.

His dance is supported by the Center for Hands-on Actions and Networking for Growth and Environment (or CHANGE for short), a non-governmental organisation dedicated to environmental and wildlife protection.

The dance is part of a communications campaign aimed at fighting pangolin hunting and trafficking.

The campaign was launched on May 6 this year and is a joint project of CHANGE and WildAid, another NGO with a vision of ending wildlife trafficking.

According to the World Wide Fund for Nature, Vietnam has become a “hotspot” of wildlife poaching and trafficking.

Figures show that the number of wild species and their populations in Vietnam are declining sharply. Determined efforts by organisations and Key Opinion Leaders like Quang Dang are expected to raise awareness about wildlife protection./. VNA

Vietnam has launched long-term and consistent efforts to strengthen law enforcement to protect wildlife and biodiversity and improve the livelihoods of people affected by declining biodiversity. 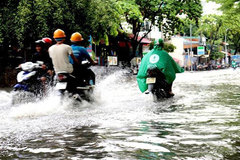