Pharmacist receives doctorate thanks to his book about herbal medicine

This was the first and only time a science council recognized and gave a doctorate to someone who had not undergone training or defended a dissertation.

Prof Doctor of Science Do Tat Loi was born in 1919 in Phuc Yen province (now Hanoi) into a farmer family. At the age of 6, he moved to the city to live and work for his uncle. 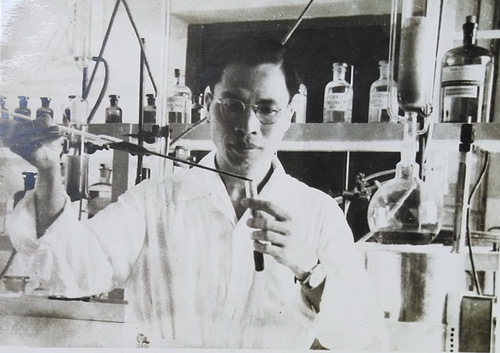 When he was in high school in Hai Phong City, he read many books and newspapers, especially science magazines.

Finishing high school in 1939, Loi decided to apply for the Hanoi University of Medicine and Pharmacy which he attended.

He learned about Vietnamese traditional medicine through documents, books and articles, and through herbalists he met on streets and in villages.

However, at that time, Loi nurtured the dream of making medicine from plants available in nature with modern methods.

In 1944, Do Tat Loi obtained a university degree and became a pharmacist. Unlike other drug stores that used the French name "Pharmacie" at that time, Loi chose a Vietnamese name for his drug store ‘Tay Mai Linh’. The store not only sold western medicine, but also medicines made from herbs.

In 1945, when the August Revolution succeeded, he believed “the revolution will create pharmacists and medicine practitioners, who have deep knowledge about both western scientific methods and traditional medicine, who are well educated to protect the heritage of the predecessors. If so, Vietnamese traditional medicine will be famous all over the world."

In late 1946, he shut down ‘Tay Mai Linh’ and joined the nation’s resistance against the French colonists with enthusiasm. During the resistance years, he and his co-workers conducted research and successfully prepared chemicals, distilled essential oils and substances extracted from plants in nature to treat wounded soldiers and people.

In 1954, he returned to the Hanoi University of Medicine and Pharmacy as a lecturer. He spent time researching and making Neriolin, medicine for the heart from truc dao leaves (Nerium oleander), and used aloe vera to cure dysentery amoeba.

Notably, he spent most of his time compiling a book about Vietnamese medicinal herbs (2 volumes), which was completed in 1957.

In 1965, he completed textbooks about Vietnamese medicinal plants and herbs (6 volumes), recognized as ‘colossal research work’.

In 1968, the Leningrad Institute of Pharmaceutical Chemistry awarded a doctorate to Do Tat Loi.

Loi is the author of hundreds of scientific articles published in Vietnamese, Russian, French, German and Romanian.

The HCM City police have carried out inspections of herbal medicine stores as part of a campaign to combat trafficking of Chinese traditional medicines into the country.

The ASEAN Conference for Young Scientists (ACYS) 2019 opened in Hanoi on December 2 with the participation of 140 delegates.