Those who often visit Hoang Lien Son Mountains might hear about a forest in the west of the range where there are numerous poisonous snakes. However, not all know where the forest is located or how to reach the area.

In Ta Leng hamlet of Tam Duong district in Lai Chau province, Giang A Binh, a Mong ethnic minority man, is ‘famous’ as an experienced hunter and professional porter, earning his living as a tour guide in tours. 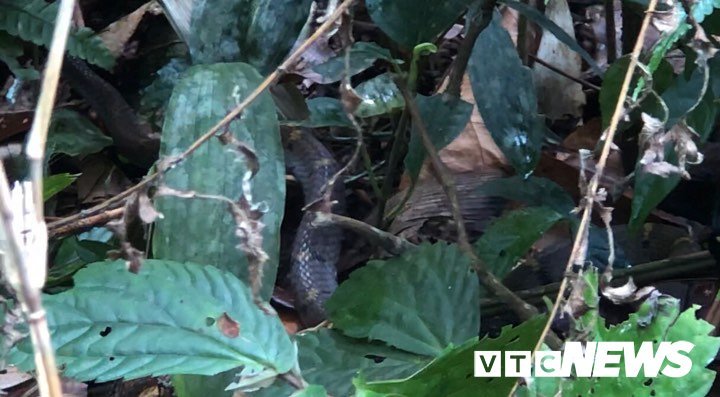 A snake is exposing itself under the sun

Binh is so good at hunting that with just one fishing line and a knife he can live for months in the forests without bringing any food from outside.

“There is no forest that I do not dare to go except that forest, because there are so many poisonous snakes,” Binh said.

“The land is full of precious ginseng (acanthopanax). If you can dig ginseng there, you can earn millions of dong worth of ginseng. But not many people dare enter that area,” he explained.

Finally, Binh and his adventure travelers reached the forest area. Everyone felt a creepy feeling when seeing the effigies on alleys. Mong people think there are many demons, and the effigies will prevent demons and ghosts from entering the hamlets to kill people.

“In that valley, there are many wild boars and chamois with serried footprints. Birds perch on trees and sing songs all the day. But the most populous animal is poisonous snake, of different kinds,” he said.

Mong people in Ta Leng have entered the forests only occasionally since the day Trang A Quy was bitten by a snake. Quy, 56, was an experienced hunter and he knew remedies to treat snake bites. But he trod onto a snake and was snatched by it.

Quy escaped death thanks to the herbs he had found, and he dressed the wound. When he reached the hamlet, he was carried immediately to hospital. Quy later stopped hunting.

Those who go into the forest regularly have the habit of applying garlic on their bodies. Wild animals are afraid of the smell, but snakes on Hoang Lien Son are not.

Soon after entering the poisonous snake territory, travelers can see snakes big as a wrist with a pale black skin, exposing themselves under the sun. They were grey, light black, and black with yellow circles.

The snake raising village in Hanoi

The doctor who is a ‘snake whisperer’