Radio frequency is a particularly important resource in any country. To control and ensure the harmonious use of frequencies, there must be staff who control the frequencies and handle frequency interference.

The special characteristic of radio frequency is that it is a finite resource, and the more it is used, the more valuable it becomes. It is considered a resource more valuable than gold. 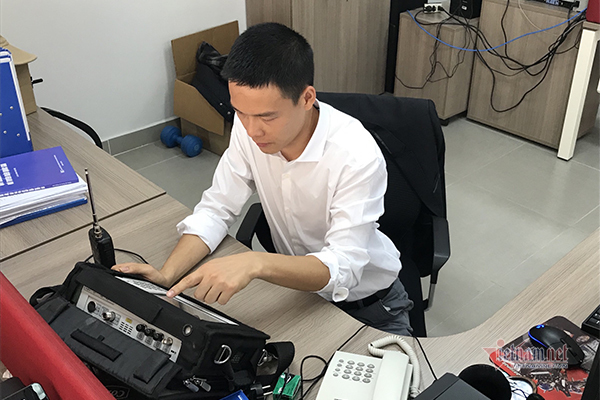 There are nearly 120 million mobile subscribers with 4G LTE in Vietnam and millions of wireless devices. The devices are used for different purposes, including aviation, maritime satellite information, and broadcasting.

The routine work of Vu Son Tung, one of the radio frequency controllers at the Authority of Radio Frequency Management, is use of technical tools to monitor frequencies of radio communication networks.

Tung and his colleagues use the control station system located throughout the country to inspect and supervise the observance of laws on the use of radio frequencies.

They have to identify interference risks and take timely measures to ensure the safety of radio information. This is a frequent occurrence because during operation, radio stations can interfere with each other, leading to loss of radio communication or to insecurity.

According to Tung, the most common incidents are interference of mobile communications, private networks and television broadcasting, and interference of frequencies for rescue, flood prevention, aviation operation, national radio stations, and security and defense networks.

Interferences often come from the improper use of radio frequencies and devices, equipment malfunctioning, or the use of smuggled equipment with unsuitable frequencies.

Tung and his colleagues sometimes have to control interference at big events such as the Party Congress, APEC Conference and the 2019 North Korea–United States Hanoi Summit.

At the events, signal congestion is very likely to happen in the context of the high density of wireless devices within a limited space. Their task at the event is ensuring the smooth operation of the radio system.

Asked about his most memorable days, Tung recalled the time when the US-North Korea Summit took place. The public wifi network at the press center of the conference had trouble, which made it impossible for reporters to transmit their reports home.

The cause of the problem was the high density of personal Wi-Fi transmitters. In addition, the network had been accidentally affected by some oppressive devices. After finding the reasons, Tung and his team successfully brought the network back to smooth operation.

The most outstanding success of Tung and his co-workers is the use of drones to control and handle interferences. This is the first time UAV has been used for this purpose in Vietnam.

PepsiCo Vietnam and its partners, the Center of Education and Development (CED) and National Economics University (NEU), have kicked off a 2-year project called “Increase awareness in plastic waste management”.

Minister of Information and Communications Nguyen Manh Hung said the Government is considering a proposal for a code of conduct for cyberspace in Vietnam and will issue the code by the end of this year.

The Vietnam Environment Administration will be in charge of completing regulations on solid waste management in the amended Law on Environmental Protection, which will treat plastic waste as a natural resource,

In the eyes of some Hanoians, the city’s green trees partly contribute to the identity of the capital.