Tran Doan Son of the Mechanical Engineering Faculty in HCM City is the author of three out of eight outstanding inventions honored by the HCM City authorities under the HCM City Patent Award 2019-2020 program. 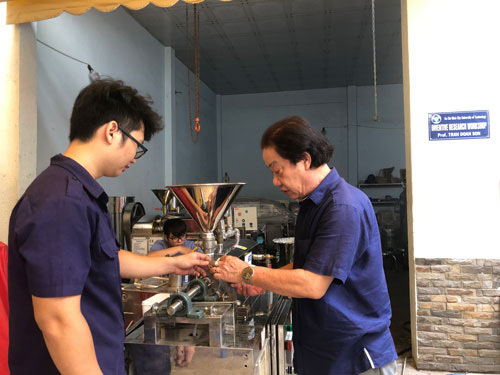 Son said in addition to the three inventions which won second, third and consolation prizes, he has other six patented products. Some inventions have been transferred to businesses or sold abroad.

His first product which was granted a patent in 2002 included equipment and a process of steaming cashew nuts with saturated steam. To date, more than 10 cashew processing plans in Vietnam and the world have been using the technology.

His other work, equipment to make soft noodles, received second prize at the HCM City Invention Award 2020. The technology has been transferred to nine businesses in Vietnam, the US, South Korea and Laos and is going to Europe in some days.

Most of Son’s inventions have been successfully commercialized. However, Son said the number of such inventions is modest.

Many research works and inventions conducted by universities are projects ordered by the Ministry of Science and Technology, local departments of science and technology, and the universities themselves.

The problem is, according to Son, most universities focus on training and are not good at cooperating with businesses to commercialize their inventions. As a result, many inventions, after receiving certificates, have been put into mothballs or just used in teaching.

Experts repeatedly say that managers, scientists and businesses need to cooperate closely in order to apply science and technology to production and business, thus improving the competitiveness of businesses. However, the link among the three partners remains loose.

Businesses say they don’t place orders with Vietnam’s universities and institutes because their technology level is not good enough to create products that satisfy businesses’ requirements.

“A business bought one machine from us and then created 70 similar machines,” a lecturer at one university said.

Son believes that there should be a playing field where scientists and businesses can meet each other. HCM City authorities, for example, should organize invention trade fairs for research teams to display products and seek mechanical engineering or manufacturing company clients.