While smartphones sold poorly in February and March because of Covid-19, the sales of laptops were very satisfactory.

Experts in 2019 had predicted that the sales of computers in general and laptops in particular would grow more slowly in 2020 because of the rapid expansion of smartphones. However, that has changed because of the epidemic. 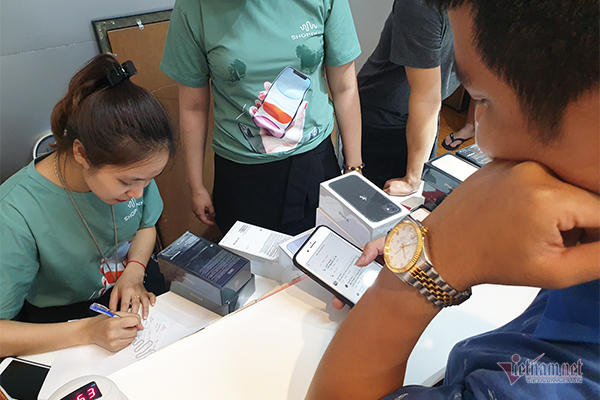 Experts in 2019 had predicted that the sales of computers in general and laptops in particular would grow more slowly in 2020 because of the rapid expansion of smartphones.

International media reports that the global smartphone market has never been so lackluster. According to Strategy Analytics, only 61.8 million smartphones were sold in February 2020, a decrease of 38 percent from the same period last year.

There is no official report about smartphone sales in Vietnam. However, distribution chains have complained about the sharp fall.

D, the owner of a private retail chain distributing Apple’s products, confirmed that the sales of some shops of his chain have dropped a lot of in the last two months.

“People only go out to buy food these days. They have cancelled plans to buy luxurious things,” he said.

As the sales dropped, D tried to negotiate with premise owners on lowering the rent. However, some landlords have refused.

However, D remains optimistic. He plans to expand his business, because it is the right time to lease retail premises at reasonable costs.

“Many business facilities have had to shut down in Covid-19. This gives opportunities to other investors to expand their networks as more retail premises have become available,” he said.

However, other retailers aren’t so optimistic. The manager of HK chain said he shut down the shop on Xa Dan street and only the Long Bien branch is open.

Thr laptop market is thriving. The Gioi Di Dong, the largest digital production distribution chain, said the sales of laptop from January to March increased by 80 percent compared with the same period last year. The sales of laptops for office workers accounted for 95 percent, while the remaining 5 percent were laptops sold for gaming.

A representative of FPT Shop said the laptop demand has increased sharply because students have switched to online learning, while office workers are now working from home.

However, analysts warn that the sales of both smartphones and laptops will decrease in the time to come because of social distancing, commencing on April 1.

Dao Duc Tien from An Phat Computer said the chain has closed all of its shops in both the north and the south.

Analysts believe that an agreement between Viettel, a mobile network operator, and Vsmart, a mobile phone manufacturer, could drive Chinese smartphones into a corner.