Major Dr Hoang Xuan Su has played a key role in developing Vietnam’s SARS-CoV-2 test kit. He is one of 14 people nominated by VietNamNet as Inspiring Characters.

Vietnam is one of only a few countries in the world which WHO has praised for its handling of the Covid-19 pandemic. 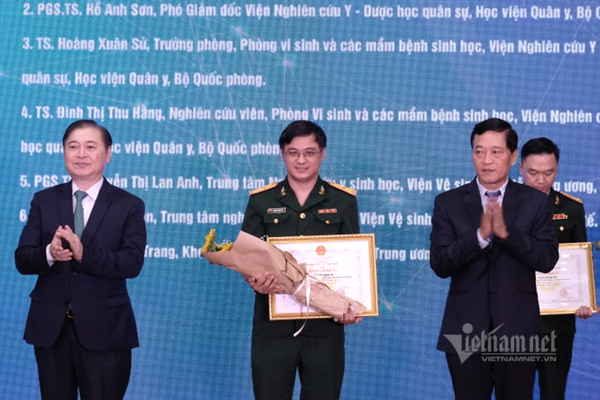 Scientists, together with physicians and volunteers, have made great contributions to the achievements in fighting Covid-19. They have helped Vietnam use efficient tools to control the epidemic.

Their most outstanding achievement is the biological kit for early diagnosis and screening of suspected Covid-19 infections.

The kit is the success of research work by scientists at the Military Medical Academy, led by Hoang Xuan Su, head of the Department of Microbiology and Pathogenesis.

Su made a great contribution to the building of a process to detect dangerous agents in the past, such as Ebola virus, B and C hepatitis virus, and dengue virus.

The SARS-CoV-2 test kit of the Military Medical Academy was developed based on the Realtime RT-PCR principle, like most other KIT tests. However, thanks to the better optimization of the number of reactions, Vietnam’s kit saves testing time.

That was why WHO contacted the research team of the Military Medical Academy to ask them to share the testing process with other laboratories around the globe.

Before the Military Medical Academy’s test kit appeared publicly, Vietnam had to rely on test kits provided by WHO to test suspected infection cases. The self-supply of test kits has been significant for Vietnam, allowing early diagnosis and screening of suspected cases.

This is an annual award that has been granted by the Bao Son Education Fund of Bao Son Group and the Ministry of Education and Training since 2011.

The research team of the Military Medicine Academy later was also honored by the Ministry of Science and Technology as one of the outstanding organizations and individuals deserving credit for fighting Covid-19.

The success of the test kit also paved the way for Vietnam to export medical products, inspired the entire globe, and spread Vietnamese aspirations.

To date, eight countries, including Laos, Cambodia, Indonesia, Ukraine, Poland, Hungary and Austria, have used Vietnam’s test kits. The test kits are either ordered by the countries or given as gifts through diplomatic channels.

Vietnam is negotiating to export test kits to another 20 countries.

The test kit was certified as meeting European standards (CE) and received the certificate of free sale (CFS) from the UK Department of Health and Social Care.

Made-in-Vietnam test kits used at the country's airports can detect pathogenic viruses at the time of testing and confirm whether the passengers are infected or not.