Many Vietnamese would rather use Japanese second-hand home appliances rather than new Vietnamese products. As a result, electronic waste continues to be imported to Vietnam.

Tran Van Tien in district 7, HCMC, said most of the home appliances used by his family were made in Japan. 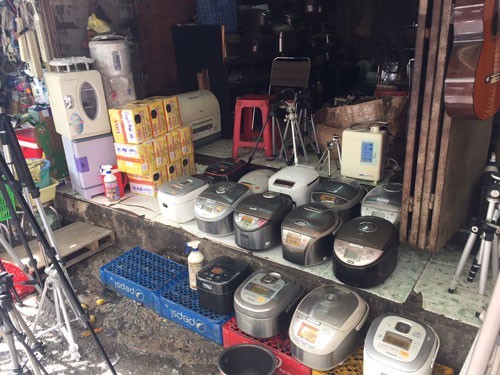 “I like Japanese products made for the internal market, because they are durable, power saving and have useful functions,” he said.

“Air conditioners, for example, have self-cleaning functions, while induction cookers have an integrated oven below,” he said. “Japanese second-hand washing machines run very smoothly and don't consume much power. So, it is even better than brandnew product. ”

Like Tien, many Vietnamese people hunt for Japanese second-hand products. Businesses rush to import Japanese used electronics for domestic consumption, ignoring the ban on importing used products. In many cases, the businesses know about the ban, but intentionally ignore it, because domestic demand is very high.

Though Japanese imports are second-hand, they are not cheap. In many cases, they are even more expensive than brandnew products made in South Korea and China.

Vietnamese also like small dish washing machines, priced at VND2.5-13.5 million, and electric cooker VND800,000-4.5 million, while a brandnew product at supermarket can easily be bought at hundreds of thousand of dong.

Thien, a well-known supplier of Japanese goods, told reporters that the supply is now short because agencies have tightened control over imports and seized a big amounts of goods, so Japanese used products have become more expensive.

According to Nguoi Lao Dong, most of the Japanese-made home appliances available in the domestic market are illegal imports.

In HCMC, imports are gathered in storehouses in the suburbs, where they are brought to wholesalers and retailers.

Vo Van Hoi, the owner of a refrigeration engineering workshop in HCMC, said Japanese used products are a kind of waste, so they are not protected well. Most of them break down and circuit boards don’t work. In most cases, products are refurbished with Japanese components.

China has vowed to stop importing solid waste by 2020, while Vietnam is still fumbling for solutions to control scrap imports.

Many experts have raised concerns about the import of thousands of containers of plastic, and proposed raising fees for importing plastic waste to Viet Nam and then using it as materials.