On September 20, the iPhone 11 hit some markets including the US, Japan, Singapore and Hong Kong. Meanwhile, sources said that Vietnamese would only obtain genuine products to be officially distributed in late October or early November. 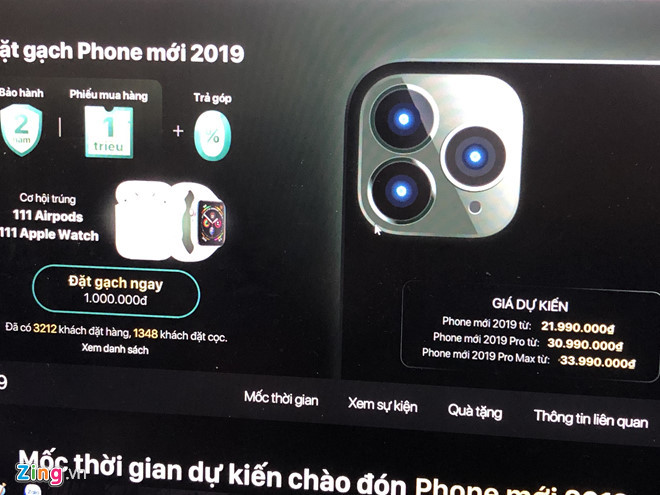 However, retailers have begun taking orders for iPhone 11 stealthily. Since iPhone 11 has not been introduced in Vietnam yet, Apple doesn’t allow retailers to expose information or take orders for products.

On the websites of The Gioi Di Dong and FPT Shop, the largest distribution chains, the chains are taking orders for iPhone 2019.

However, the names of the products were not clearly specified and the image of the product does not appear on the banners, though Apple has introduced products to the world market.

“Apple strictly controls information related to iPhone. iPhone 11 has been introduced, but the manufacturer is yet to introduce the products officially in Vietnam,” explained Nguyen Bich Hanh, media executive of FPT Shop.

Meanwhile, smaller retail chains take orders in an open way. All the information about the products, including the names, selling prices and detailed specification, is shown clearly.

“The number of orders for the iPhone 11 is by far higher than predecessors,” said Tran Duc Tin from The Gioi Di Dong.

The same can be seen at other distribution chains. Nguyen Viet Hoang, deputy CEO of FPT Shop, said the number of orders for iPhone 11 is 30 percent higher than last year.

“We have nearly 2,500 orders with more than 900 buyers having paid a deposit. 60 percent of buyers order iPhone 11 Pro Max 64GB. Midnight Green is the favored color,” he said.