This is the first time a study on anti-inflammatory and analgesic effects of bee venom (apis mellifera) on experimental animals has been carried out in Vietnam.

In 2010, when participating in a research on bee glue at beekeeping farms in Japan, Nguyen Thi Thanh Mai, chemistry dean of the HCM City University of Natural Sciences, accidentally stumbled upon bee venom. 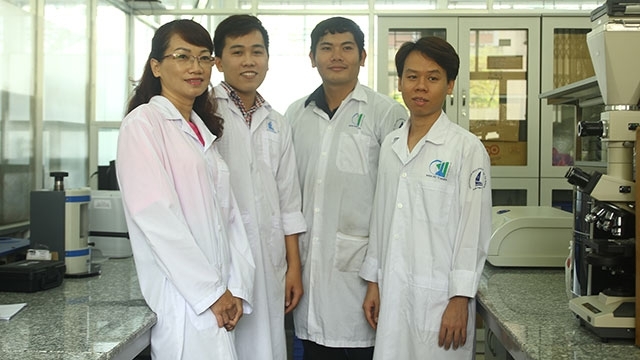 Later, Mai and her colleagues began to carry out in-depth research about the process of extracting venom. Their project began an extracting process and evaluated the pharmacological effects, using extracted bee venom in treatment of arthritis.

Since ancient times, bee venom has been used in folk remedies to treat a number of diseases, especially rheumatism. Modern studies show that bee venom is anti-inflammatory and analgesic because it contains enzymes, peptides and amines.

The research in the world also shows that bee venom can also be used for pain relief, detoxification from cigarettes and drugs, cancer, high blood pressure, asthma and anti-aging.

Bees globally are used today for honey and bee venom to make drugs and cosmetics, but in Vietnam, people only keep bees for honey, and the value of the bee venom has not been exploited.

That Vietnamese scientists decided to carry out research to build a process of extracting, assessing and analyzing bee venom quality on Apis mellifera, the common bee species in Vietnam.

After gaining initial success, the research team reported its research to the HCM City Department of Science and Technology and cooperated with the HCM City Traditional Medicine to conduct research with the purpose of producing injections.

Bee venom is extracted by a bee venom collecting device based on the principle of electric shock from z direct current.

Raw bee venom, after collected from farms, us dissolved into distilled water and shaken vigorously for 30 minutes. The solution is later filtered through a cellulose filter membrane. The solution after filtration will be frozen and will condense at temperature of <- 40oC.

The content of main components in the extracted bee venom is similar to the standard bee venom product of Sigma-Aldrich and other countries.

The scientists also found that with the dose of 1.0 and 1.5 mg kg-1, bee venom has anti-inflammatory and analgesic effects, reduces the temperature in the feet of mice, and slightly reduces the amount of white blood cells and red blood cells in the peripheral blood during 21 days after causing inflammation.

The research team is seeking investment to commercialize products made of bee venom.

The invention by the scientists from the Institute of Materials Science, belonging to the Vietnam Academy of Science and Technology, can help recover more than 90 percent of copper from zinc electrolyte wastes.