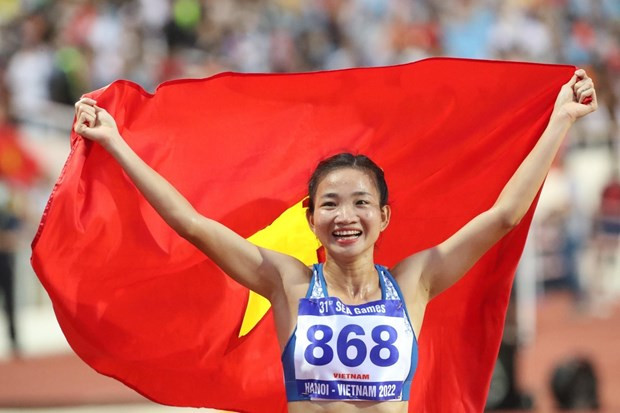 The Vietnamese delegation made history by winning 22 gold medals, surpassing its set target of 15-17. Track and field continued to be Vietnam’s ‘gold mine’ at the region's largest sporting event.

With these achievements, Vietnam topped the athletics medal tally for three consecutive years.

On May 19 morning alone, athletes of the host nation bagged golds in three out of four events. He reached the finish line first after 2:25:08, faster than the second-placed Prayogo by 30 seconds, and set a new personal record.

Previously, Nguyen Linh Na pocketed a gold in the women’s heptathlon for Vietnam after 17-year drought.

Bui Thi Nguyen clocked 13.51 to win a gold in the women’s 100m hurdles, while Lo Thi Hoang sprang a surprise in the women’s javelin throw with 56.37m, setting a new SEA Games record.

Oanh successfully defended her title in her three fortes: the women’s 1,500m; 5,000m and 3,000m steeplechase, in which she broke her own record set in the previous SEA Games.

This year, Huyen claimed the 10th gold  for her collection of gold medals at SEA Games.

The biggest regret was that Le Tu Chinh was ruled out of SEA Games 31 by injuries, a considerable loss to the host country in the women’s 100m and 200m races and 4x100m relay. She used to pocket four gold medals at the two previous Games.

Athletic events took place at My Dinh National Stadium in Hanoi from May 14 to 19.

Success in athletics, dubbed ‘Queen of Sports’ and a popular Olympic one, proved that Vietnam has been on the right track in investment strategy of sports.

General Secretary of the Vietnam Athletics Federation Nguyen Manh Hung expressed his hope that recent achievements will inspire young talents so that the country’s athletics will take off further.

At SEA Games 29 held in Malaysia in 2017, the team obtained up to 17 gold medals for the first time in the regional sporting event’s history, almost doubling Thailand’s results, though the initial target was set at about 10 - 12 golds.

Two years later, track and field athletes of Vietnam won 16 golds, 13 silvers, and nine bronzes, sustaining their top place on the medal table at SEA Games 30 in the Philippines.

SEA Games 31, themed “For a Stronger South East Asia”, is being held in Hanoi and 11 neighbouring provinces and cities until May 23.