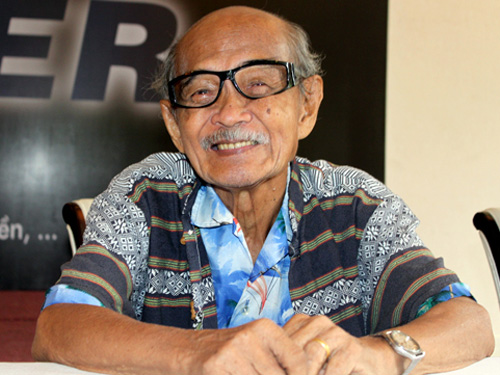 According to family members, Ho Kieng fell at his apartment in District 3 because of recurrent heart disease. Family members took him to the hospital for emergency aid but he could not survive.

The senior, talented artist passed away at the age of 87, with an artificial heart.

Despite his advanced age and living with an artificial heart, Ho Kieng still worked very hard with film projects in his last days.

Ho Kieng impressed the audience through many movies, including Southern Land, Tay Do’s Pretty Woman, Xa Nu Forest, Hon Dat, Open Game of Cards, Cold Summer, etc. Although most of his roles are supporting roles, Ho Kieng is still remembered by the audience for his acting talent.

In particular, he could play all types of roles, from a villain to a gentle farmer, a patriotic man, etc.

Thanks to the diverse acting ability, in 1992 he was voted as the versatile actor who could play all types of characters.

In 1997, he was conferred the title Meritorious Artist. In 2006, the Vietnam Record Book Centre recognized him as "the artist playing the highest number of supporting roles in Vietnam."

Also in 2006, the HCM City Department of Culture and Information selected Ho Kieng as one of the five artists who met the standards to be granted with the People's Artist title, the noblest title for a Vietnamese artist.

Besides acting, Ho Kieng also wrote poetry. He began writing poetry since the age of 25 and did not stop this passion.

The cremation ceremony of the senior artist will be held at the Cu Chi Cemetery, HCM City today, April 5.