Shophouses left idle for half a year as retailers suspend business

Shophouses, which are considered ‘money spinners’, have been unused for many months amid the impact of the pandemic. They cannot be sold or leased. 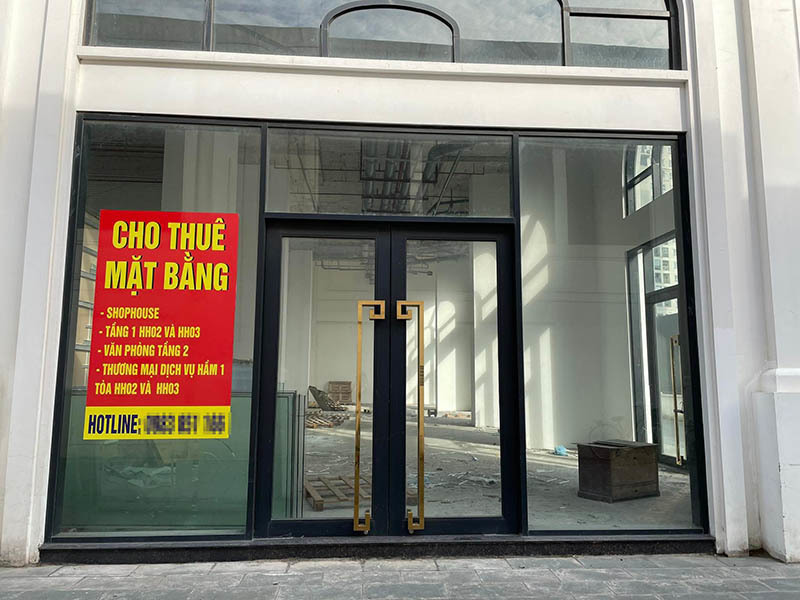 The shophouse on the first floor of an apartment building in HH Linh Dam residential quarter has been closed for months after a convenience store selling low-cost Japanese products moved out.

The shophouse faces Linh Duong Street near a 12-storey apartment building with thousands of households. However, the shophouse cannot find tenants.

Other shophouses in the area with thousands of consumers are in the same situation. Before the pandemic broke out, they were coveted by retailers, even though the average rent was high, VND30-50 million a month.

At HUD3 Linh Dam apartment building, after a private clinic moved, three shophouses have been left idle. The shophouses are located in positions less advantageous than HH Linh Dam as they are hidden behind a building so they are very difficult to lease.

A shophouse covering an area of 70 square meters at the Rainbow apartment building is also unoccupied, after a Soya Garden shop shut down.

Many shophouses and kiosks on first floors of apartment buildings in Hanoi have few tenants and most them sell clean food, medicine, or run eateries and cafes.

The retail premises remain unleased because of the high rents. Hoa, a worker at a clinic, said while other tenants in the area got support from landlords who reduced the rent, her clinic couldn’t. The owner of the clinic decided to give back the premise and move to another location.

Luu Thi Ngan, the owner of a clean food shop in Linh Dam, said the rent of retail premises at apartment buildings are still high, while sales have dropped sharply because of the pandemic. As revenue is not high enough to cover the rent, retailers are suspending their business and giving back retail premises.

Nguyen Duy Linh, the representative of a brokerage company, said the shophouses at apartment buildings mostly serve demand for essential goods and services of local people, so large brands don’t set up their outlets there. The retail premises are mostly used for convenience stores, groceries, cafes, and drug stores. The premises with large area are used for gyms, but many gyms have shut down.

The unoccupied premise rate is increasingly high. Landlords now are under pressure as they have to pay money to maintain the premises.

Covid-19 has caused retail revenue to drop sharply, impacting the domestic retail property market. Many shop owners have had to suspend their business and give back their premises to landlords.

To attract tenants, many landlords have to offer flexible payment methods and price discounts. Some landlords accept payment monthly instead of once every six months. Meanwhile, the rents have been lowered by 20-30 percent to help ease the financial burden on tenants. Also, they offer preferences for parking lots and service fees.

Unable to lease premises, many landlords have tried to sell them but have found no buyers.

Linh said landlords bought the shophouses from project developers before at high prices, so they set high rents and now want to sell them at high prices. Buyers won’t accept high prices at this time.

“It’s now more difficult to lease shophouses than apartments, because the demand for accommodation always exists,” he said.

The income of the owners of villas and street-front houses has dropped dramatically over the last year because of low demand. Many owners have been told to pay tax if their revenue is over VND100 million a year.