VietNamNet Bridge – Vietnamese shrimp exporters are now facing their highest-ever anti-dumping duty after eighth period of review (POR 8) by the US Department of Commerce (DOC) in late August.

VietNamNet Bridge – Vietnamese shrimp exporters are now facing their highest-ever anti-dumping duty after eighth period of review (POR 8) by the US Department of Commerce (DOC) in late August. 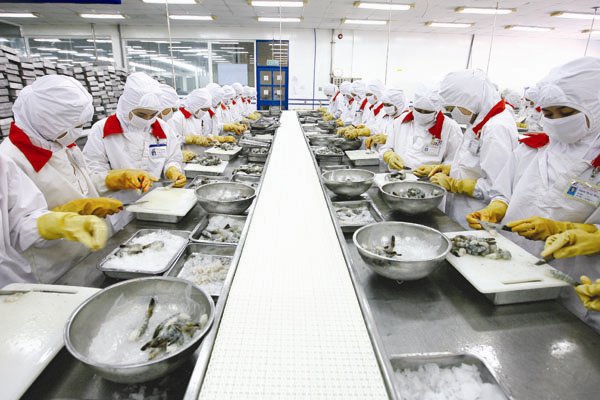 The DOC released the final decision on the anti-dumping duties on warmwater shrimp imports after administrative review from February 1, 2012 to January 31, 2013.

The US imports 90 percent of its shrimp imports, mostly coming from Indonesia, Ecuador, India, Vietnam and Thailand. Ecuador led the countries in shrimp exports to the US in the first seven months of 2014, followed by Indonesia, India and Vietnam.

However, Ecuador and Indonesia now have advantages over the other exporters because they have not been affected by the POR 8.

Meanwhile, the anti-dumping duties on Vietnamese products have increased to an all-time high.

An anti-dumping tax of 4.98 percent has been imposed on exports of Minh Phu Seafood Company to the US, while Stapimex faces a 9.75 percent tax and other defendants a 6.37 percent tax.

Only Marine Gold was not on the list of the items to the 2014 preliminary taxation as the company had escaped from an anti-dumping investigation since February 1, 2012.

Vietnam has been warned about big difficulties ahead, as it not only faces the highest ever anti-dumping duties, but also shrimp EMS (early mortality syndrome).

Indonesian shrimp have been reportedly safe from EMS, which, together with the free anti-dumping tax, have led to its sharp increase in exports to the US.

However, reports released recently showed there were some signals of WSS (white spot syndrome) on the shrimp cultivated in Indonesia.

India, though reporting that its shrimp are free of EMS, still face difficulties in the time to come because it must bear anti-dumping duties.

The Falcon Marine Company will bear a tax of 3.01 percent, the highest-ever tax rate so far.

The country has fallen from the Number 1 position on the list of top shrimp exporters to the third position after the first seven months of the year.

Thailand reportedly is in the most serious situation. Kasikorn, a Thai market survey, has warned that Thailand would, for the third consecutive year, witness a fall in exports in 2014.

As for Vietnam, analysts said after the satisfactory performance in the first seven months of the year, shrimp exports will suffer major negative impacts from the US DOC’s decision on high anti-dumping duties.