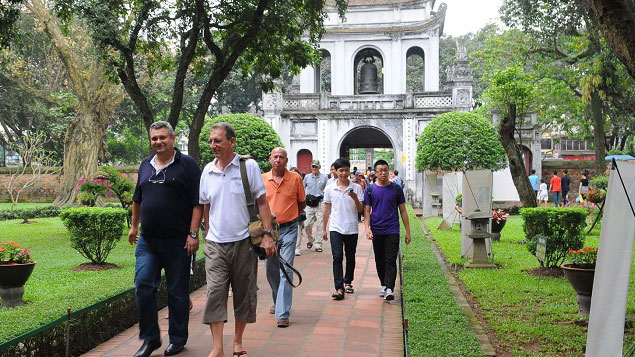 The number of arrivals for key markets witnessed sharp declines across the board, most notably those from Asia (down 12.6%) and Europe (down 7.3%), which is causing grave concern for those involved in the tourism and hospitality industries.

Initially Luong postulated that a strong US dollar in relation to other currencies of the world had caused residents of many countries, particularly the EU and Japan, to reduce their spending and cut down on travel.

However, this hardly seems a plausible explanation as inbound arrivals to other countries, such as Thailand and Cambodia, in the Southeast Asian region have risen during the five month period.

Secondarily Luong hypothesized that complicated, lengthy and costly visa and transit procedures were a significant contributing factor leading to the decline in travelers and suggested streamlining the process was in order.

Tong Thi Thu Hien, director of the Thang Long GTC Travel Company in turn suggested that maybe mischievous pick-pocketing, other thievery, overcharging and traffic safety issues have been detrimental to the tourism and hospitality industries.

In addition, LuuDucKe, Hanoitourist Director, pointed out a number of subjective reasons for the sharp decline and said the country is not investing enough in marketing itself abroad while our competitors are.

For his part, Le Cong Nang, a representative from Vietrantour, said the higher cost of travel in Vietnam is definitely one of the culprits.

For example, the cost for a one-night stay with meal at a three-star hotel was US$22.50 per person in Thailand, US$30 in Malaysia, US$40 in China and US$80 in Vietnam.

Overall travelers report spending on average 57% of their total travel budget on accommodation in Vietnam, Nang said— which is exorbitantly high when compared to other nations in the region.

To cope with the situation, Minister of Culture, Sports and Tourism Hoang Tuan Anh has urged localities to drastically punish Vietnamese who exhibit bad behaviour that negatively reflects on the image of Vietnam.

Improving the tourism environment should be considered the number one priority because if it isn’t dealt with promptly, the loss of foreigner tourists to other markets is unavoidable and will continue to drag the tourism industry and national economy down.

Last but not least, VNAT General Director Nguyen Van Tuan echoing Ke’s sentiments said the silver lining for coping with the problems plaguing the tourism and hospitality industries is to improve the quality and efficiency of marketing in key markets.