"The X Factor" and "Got Talent" guru Cowell joined forces with the video sharing platform to run 26 biweekly contests, called "The You Generation", for hopefuls in 26 countries over the next 12 months.

"We wanted to devise a way that it's easier for you to get noticed," explained Cowell in an interview in his padded-wall office posted on the "You Generation" channel.

Contestants immediately began uploading videos in a host of categories -- vocalists to chefs to make-up artists -- after an hour-long introduction, live on YouTube, by the Cowell-managed Brit boy band One Direction.

Entries will be judged by talent scouts at Cowell's production company, in a joint venture with Japanese electronics and entertainment powerhouse Sony.

Cowell hopes the initiative will make up for a slide in viewing figures for conventional TV talent shows as more artists bypass traditional routes to success by harnessing the power of the Internet.

Notable among those previously discovered on YouTube is Justin Bieber -- but Cowell's idea is to have a one-stop YouTube channel for fans to size up new acts without having to surf all over the website.

The first artists posting on Wednesday swiftly collected hundreds of thousands of views, although comments varied between positive reviews and criticisms of Cowell's tastemaker status in the pop music industry.

YouTube is striving to become more than simply a place to watch amusing cat videos by encouraging, and in some cases bankrolling, original programming.

"It's the biggest TV channel now in the world," Cowell said. "It's changed everything. It has literally changed the music business -- for the good." 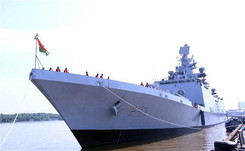