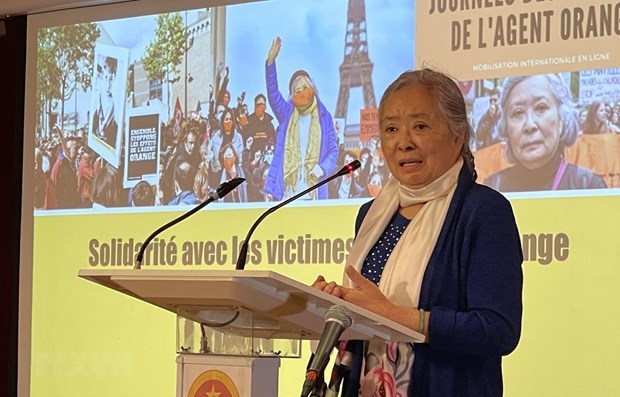 Vietnamese Ambassador to France Dinh Toan Thang has appreciated efforts made by Collectif Vietnam Dioxine members to support campaigns to back Vietnamese French woman Tran To Nga’s lawsuit against US chemical companies and to raise funds for Agent Orange (AO)/dioxin victims in Vietnam.

Receiving the organisation’s representatives on October 2, Thang expressed his admiration for the determination and courage of Nga who has persistently pursued the lawsuit against US companies that had manufactured the toxic AO defoliant used by US forces during the war in Vietnam.

He informed Collectif Vietnam Dioxine about efforts the Vietnamese State and people are making to alleviate the physical and mental pains of Vietnamese AO/dioxin victims.

Every year, the Vietnamese State spends about 400 million EUR (463.7 million USD) on the care, support and vocational training for the victims.

In 2019, the Ministry of Agriculture and Rural Development decided to remove glyphosate from the list of phytosanitary products allowed to circulate in Vietnam, which is considered a responsible action of the Vietnamese government with a hope to put public health above economic and commercial issues. In addition, decontamination at sites severely polluted by dioxin such as Bien Hoa and Da Nang airports has also been implemented effectively with the support of the US government, according to the diplomat.

The ambassador called on Collectif Vietnam Dioxine members to continue to take practical and concrete actions to help and support AO/dioxin victims in the coming time. He also pledged to always stand side by side with them in the fight for justice and rights for the AO/dioxin victims in Vietnam.

At the meeting, Nga expressed her gratitude for the sentiments and support of French friends and Vietnamese people around the world, which, she said, has motivated her to continue fight till her last breath.

Vo Dinh Kim, coordinator of Collectif Vietnam Dioxine, affirmed that the organisation will continue to organise dissemination activities about Agent Orange, and call for help for victims as well as support for Nga's lawsuit.

The organisation has sent a written request to the French government calling for an official day to commemorate AO/dioxin victims, he added.

As a result, around 4.8 million Vietnamese were exposed to the toxic chemical. Many of the victims have died, while millions of their descendants are living with deformities and diseases as a direct result of the chemical’s effects.

German media: plaintiffs and supporters of Tran To Nga’s lawsuit not deterred