According to the people in Thanh Son Commune, since 2018, wild elephants have started coming to their villages. At first, there were only one or two elephants that came out then more and more elephants joined them. Since early 2020, the elephants come to the villages every night to search for food.

They also go to the villages much more often. The villagers said they only had to deal with the elephants once or twice a week previously but now, the herd has come out almost every night. They have damaged the crops and even went into some houses to find food.

Huynh Thi Cuc in Hamlet 5 said, "We have over 3.5ha of mango trees. During last year harvest season, the elephants ruined over 10 tonnes of mangoes and destroyed many trees. This year, they have ruined nearly four tonnes of mangoes so far and our water pipes." 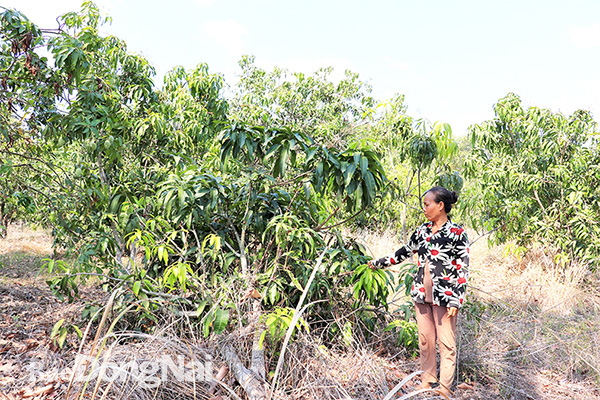 She went on to say that it cost her VND10m (USD428) to replace the water pipe but she was afraid that the elephants may keep getting more aggressive and attack people. She has four children and old mother at home. Many farmers have to abandon the fields to find other jobs.

80-year-old Luu Thi Kha said, "I've lived here for 60 years and never seen such aggressive elephants. They were in a herd of three to four and casually ransacked the house. I'm old but I'm worried about the children. What if the elephants go on a daylight rampage? The parents are at work far away and may not react in time."

The people in Thanh Son Commune have complained to the authorities for over two years but the electric fence hasn't been set up.

Nguyen Tan Tai, vice chairman of Dinh Quan District said, "85 households suffered from the elephant rampage in 2018. We have given VND800m (USD34,200) to support the farmers. We are reviewing the damages caused last year for more support."

The province's emergency plan for elephant conservation for the 2014-2020 period has been approved, in which they will build an electric fence in Thanh Son Commune. The district authorities have urged provincial authorities to quickly complete the fence to protect the villagers.

Ngo Van Vinh, deputy head of the provincial Department of Forest Protection said, "The provincial authorities allocated nearly VND30bn (USD1.3m) to build 20km of the fence in Thanh Son. The project is still in the first stage in finding a contractor. It is estimated that the fence will be built in late 2020 and completed in the following year."

During a field survey about forest protection, Nguyen Son Hung, vice chairman of Dong Nai People's Committee, said, "Wild elephant rampages are threatening hundreds of households in Thanh Son so the local authorities must quickly complete the procedures and work with the contractor to build the fence as quick as possible."

Over VND10bn will be allocated for 2020 and the rest will be disbursed in 2021. The maximum deadline for the project is three years. The electric fence in Thanh Son will connect with the fence in Phu Ly Commune. Dtinews/Dan Viet