Vietnam Airlines flight VN417 from Seoul (South Korea) to Hanoi is scheduled to depart on the morning of September 25. The flight will be on an Airbus A350 aircraft with more than 300 seats.

Vietnam Airlines is the first air carrier in the country to reopen international commercial flights to Vietnam.

Due to special requirements relating to COVID-19 prevention procedures, tickets will not be available for purchase on Vietnam Airlines’ website. Instead, customers will have to buy tickets through the airline’s ticketing agents in either Vietnam or South Korea.

Immediately after the Government and authorities gave their approval on the night of September 22 for the resumption of the flight, the airline and other relevant units finalised all necessary procedures in order to reopen the air route. The flight will be subject to strict regulations that follow all necessary COVID-19 prevention and control measures.

This came after Vietnam Airlines safely conducted its first regular international commercial flight from Hanoi to Tokyo, with approximately 60 passengers onboard, the majority of whom were international students and guest workers, along with some Japanese citizens.

Besides routes to Japan and the RoK, Vietnam Airlines has initiated plans to restore flights between the country and China, Taiwan (China), Laos, and Cambodia in the near future.

The Civil Aviation Authority of Vietnam has submitted detailed plans for flight schedules and requirements for airlines to bring international passengers into Vietnam, awaiting approval from Ministry of Transport and concerned authorities. 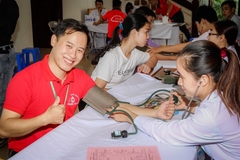