Hanoi to inspect use and management of apartment buildings

The move aims to solve difficulties and clarify the cause and responsibilities of State management agencies, authorities, businesses and people in the management, operation and use of apartment buildings.

Gia Lam, Hoai Duc, Chuong My, Thanh Oai, Me Linh, Dan Phuong and Quoc Oai districts will be examined in the third quarter.

Most disputes relate to the use of management and maintenance funds at apartment buildings.

According to the current Housing Law, the owner of an apartment must pay an extra 2 per cent of the total apartment selling price for maintenance inside the building. The fees collected by property developers must be passed on to residents’ committees no later than seven days after a residents’ committee is set up.

However, several developers have delayed transferring the fees to residents’ committees, causing disputes among residents and developers.

After the inspections, the Construction Department will name investors who do not comply with regulations on management and use of apartment buildings.

As Hanoi's new apartment buildings rise, so do disputes

The Ministry of Construction will organise an inspection on the use and management of maintenance funds at residential buildings in HCM City and Hanoi beginning next year.

State agency or company should manage apartments in Hanoi: expert

An enterprise or the State agency should be responsible for the management of apartment buildings and the building’s maintenance fund.

The Thai government will block all travel to Thailand, including by Thais, from April 2-15 to prepare "state quarantine" facilities after more local COVID-19 patients have been linked to imported cases.

Outrage over a Muslim congregation that led to new Covid-19 cluster turns hateful.

Some places are yet to record a case - but what will they do if and when it arrives?

About 70 percent of Thais understand and are engaging in the "social distancing" campaign, which is a major strategy to curb the transmission of COVID-19, the latest survey conducted by Thailand’s Department of Mental Health showed.

Eleven minor earthquakes have occurred in Vietnam since the beginning of this year, according to the Standing Office of the Central Steering Committee for Natural Disaster Prevention and Control.

The appeal trial for the case involving MobiFone Telecommunications Corporation’s purchase of a 95 percent share in Audio Visual Global JSC (AVG), initially scheduled for April 13-16, will be suspended due to the COVID-19 concern.

Phia Den mountain, Cao Bang province, is considered hometown of glass noodle as natural conditions here are ideal for not only growing its ingredient – canna, but also for its making process. 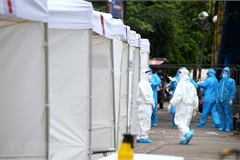