Twelve checkpoints in the gateways to HCM City will only check vaccination records and will not require a negative COVID-19 test for people traveling to HCM City, except for those coming from "very high-risk" areas.

The decision will help create favourable conditions for goods transport and meet the travel demand of people between provinces and HCM City.

Officers at the checkpoints will only check the health declaration on the VNEID app and the e-health book showing either one or two shots of vaccine received at least 14 days before entry. People who have recovered from COVID-19 within the last 180 days will need to show proof.

Travelers will be required to provide a negative test result if they arrive from very-high risk areas.

Le Hoang, deputy director of the centre, said these routes would reopen based on reports about travel demand.

Earlier this month, the city resumed operation of four bus routes in Can Gio District after the district was classified as a green, or safe, zone.

Barriers at hundreds of pandemic checkpoints that blocked off alleys, residential areas and some roads in green zones in HCM City have been removed.

HCM City on the first day of the new normal 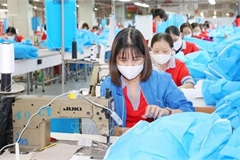