Tipped off by local residents, the police carried out a search and found the group were residing at an apartment in Ward 22 of Binh Thanh district.

Following the search, each individual subsequently underwent a medical check-up before being immediately placed into quarantine in line with protocol to halt the spread of the novel coronavirus (COVID-19).

HCM City has kick-started the COVID-19 prevention and control campaign after two coronavirus cases were confirmed in the locality.

In addition to controlling people returning from COVID-19 affected areas such as Da Nang, a coronavirus hotspot, the city is also at risk of the epidemic spreading through people who have illegally entered Vietnam, said Nguyen Tri Dung, director of the municipal Centre for Disease Control.

With this threat under consideration, Dung recommended that cases of foreigners illegally entering the country face harsh punishments and be deported from the country.

Hundreds of Chinese nationals have entered Vietnam illegally during the past few weeks, accoding to preliminary reports. Local authorities across Vietnam, including Ho Chi Minh City, have detected and quarantined these citizens in line with regulations on COVID-19 prevention and control.

Phùng Thế Anh, 26, and Vàng Seo Xóa, 31, from Bảo Thắng and Mường Khương districts, Lào Cai Province have both been arrested in connection with the illegal enterprise.

They said they came to work at a garment factory in HCM City, claiming that they were helped by Anh and Xóa.

At the border station, Vàng Seo Xóa confessed that a Chinese subject asked him to bring Chinese people to Việt Nam.

Xóa said he would be paid 500 Chinese yuan (US$71.4) for every person who enter Việt Nam successfully.

For each payment, Xóa said he waited for the money to be thrown across a stream, tied to a rock.

Phùng Thế Anh told police that he knew some Chinese nationals when he used to work as a driver at a casino in Lào Cai Province.

He said he co-ordinated with them to help Chinese nationals enter Việt Nam illegally. VOV/VNS

The aviation authorities of China, South Korea, Japan, and Taiwan (China) have asked Vietnam to clarify the immigration process, isolation and medical requirements for international flights. 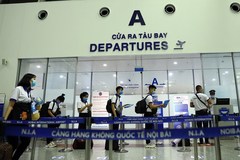