Every few months, reports circulate of large numbers of people falling ill after a wedding or other gathering. 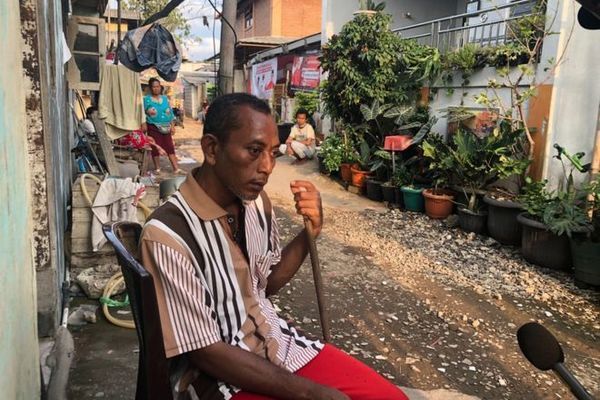 The illnesses - often deaths too - are blamed on bad alcohol; cheaply made homebrew which contains potentially lethal levels of methanol.

Big outbreaks of methanol poisoning make the news, but the reality is that every day around the world people gamble on a bottle of cheap booze. And experts say that in many places, if something does go wrong, medical staff simply don't have the awareness to stave off critical injury or death.

In a slum district of Jakarta, Indonesia, Kardi recalls his years of drinking bootleg alcohol. It was his "energiser" for work as a motorbike mechanic, he says.

"I don't mean to brag but I had money. I drank every day."

But one day, one of the regular customers at his workshop in Jakarta turned up with some cheap bootleg, known in Indonesia as oplasan. It cost about 7,500 rupiah a bottle (£0.42; $0.53).

"I drank eight of them", says Kardi. "I could work on two to three motorcycles but I ended up not touching the fourth. I kept drinking. Next thing I knew it was 2am."

Overnight, it became clear he was suffering from more than a hangover. Kardi woke up in the night with crippling stomach pains. "It was like... this," he says, crunching a plastic bottle in his hands. He tried to make himself sick, but "it was all black" and he eventually passed out.

A family member took him to a hospital, but the staff refused to treat him, he says, because they were Muslim and he had been drinking - not an uncommon occurrence. A second hospital was also about to turn him away but, by chance, he had fixed the motorbike of one of the doctors on duty. This doctor agreed to treat him and immediately diagnosed methanol poisoning.

Methanol is produced during the brewing process and concentrated by distillation. Commercial manufacturers will reduce it to levels which are safe for human consumption. However, unscrupulous backyard brewers or others in the supply chain may sometimes add industrially produced methanol, to make it go further and increase profits. It is also possible for high levels of methanol to be produced by contaminating microbes during traditional ethanol fermentation.

Overnight, Kardi's body had finished processing the ethanol from the oplosan. Next, it started on the methanol, metabolising it into highly toxic formic acid. His body gradually became more and more acidic, giving him chest pains, gastric pain, headaches and blurred vision.

The doctor was able to save his life, but Kardi's injuries were life-changing. He suffered temporary full-body paralysis and full movement was never restored . His eyes had been severely damaged - over the following years he lost his sight almost completely.

His wife left him and he is now dependent on his community to get by.

Kardi's cloudy eyes are fixed in the middle distance as he says that in some ways he was lucky. Two of his drinking partners that night died.

"If you ask people if they've seen methanol poisoning they would say no," says Dr Knut Erik Hovda, a global expert in methanol outbreaks, based at Oslo University.

"If you ask the same person whether he or she has seen someone becoming blind or dying from drinking, they would say of course, this is happening all the time. And that is highly specific for methanol."

Along with Medecins sans Frontieres (MSF), Oslo University set up the The Methanol Poisoning initiative (MPi), which is meticulously documenting methanol outbreaks to get a sense of the scale of the global problem.

Incidents they've tracked include one in February this year, when at least 150 people, most of them tea plantation workers, died and many more were left blind or disabled in India's Assam state in one mass poisoning. The team documented 84 deaths at one outbreak in Iran last year.

"The biggest outbreak was in Libya," says Dr Hovda. "More than 1,000 patients were admitted in less than a week, on top of that we know of several people dying out of hospital."

Dr Hovda said the problem is that not only do victims not recognise what has happened, but medical staff rarely have the skills and knowledge to deal with such a poisoning.

So the initiative is working to raise awareness of the need for quick diagnosis and treatment to avoid avoidable suffering and hundreds of deaths each year. They travel around the world training staff and have developed films and educational material targeting the public in affected areas.

They also have a rapid response team, which can deploy anywhere in the world as soon as there's word of a mass outbreak.

"We have these thousands of people being blinded or dying unnecessarily," says Dr Hovda.

"We can help if we first of all get people to search for help and when they go to hospital or healthcare providers, they recognise it and go back to the area these people are coming from and start looking for other victims."

Not morality but disease

One of the biggest issues they're fighting in predominantly Muslim countries like Indonesia is that drinking alcohol is taboo or even illegal, so people will avoid seeking help out of shame or fear of incrimination.

"It's really a taboo in the region," says Dr Chennery Lim, a doctor with MSF and a member of the MPi.

"That's the reason why, when we do the awareness raising, we also want to make them understand that this is a health problem.

"Don't look at it as morality, it's a disease."

It doesn't help that the best antidote to methanol is ethanol. That also means that if a person has drunk both ethanol and methanol - as Kardi had - it can be a while before the poisoning takes effect.

But also, shots of vodka or gin will stave off the effects of the methanol until the affected person can get professional help and as Kardi found in Indonesia, medics in countries where alcohol is taboo may refuse to use ethanol as a treatment, or turn people away if they've been drinking.

'Can we treat it with coconut milk?'

Lhani Davies runs a charity called Lifesaving Initiatives About Methanol (LIAM), which advises tourists on how to avoid methanol and what to do if someone gets poisoned.

The acronym was the name of her son, who died while holidaying in Indonesia in 2012.

Well aware of the dangers of methanol poisoning, they'd stayed away from local alcohol and stuck to imported alcohol, but were unaware the bar staff had decanted moonshine into the branded bottles.

Liam fell severely ill, but because of a string of misdiagnoses, received no appropriate methanol treatment for 20 hours. He died three hours after being flown back to Australia.

"Two years after Liam died we were contacted by people who had taken someone to exactly the same hospital with suspected methanol poisoning," she told the BBC.

"They'd already phoned up, they'd given him ethanol on the way and it had really reduced his symptoms. That's a true sign of methanol poisoning.

"They got there and they said no, this is a Muslim hospital we don't treat anyone with anything to do with alcohol."

She says medical staff need to be trained to realise that methanol poisoning is not the same as heavy drinking, and that it needs urgent - and specialist - treatment.

"So now we say this is a modern, man-made issue and it can't be treated traditionally, it has to be treated with modern medicine."

Ricardo Hutahaean, a community leader in Kardi's neighbourhood, says alcohol addiction is a huge problem and that the best way to stop people risking their lives with moonshine is to give them hope.

"They don't have jobs, they don't know what to do with their lives," he told the BBC. "They've been dehumanised."

He is working with people who've survived poisoning to "help them be more productive, to go to work" and to train them to "speak up on the dangers of this phenomenon".

"Those who have not been exposed, we must protect them, we'll stimulate them to do meaningful and better activities so then it can beat the negative ones."

The man who sold Kardi the moonshine was arrested. Kardi got some compensation, but he's now he's largely dependent on his neighbours. He has given up drinking completely and talks freely about his mistake. But he's not yet got through to one of the other survivors of that night.