Four people who refused to work for local agencies after finishing overseas training courses funded by Quang Ngai province have been forced to pay 200 percent of the training fee.

Doan Dung, director of the Quang Ngai Department of Interior Affairs, has signed decisions on forcing the four to reimburse the training fee. 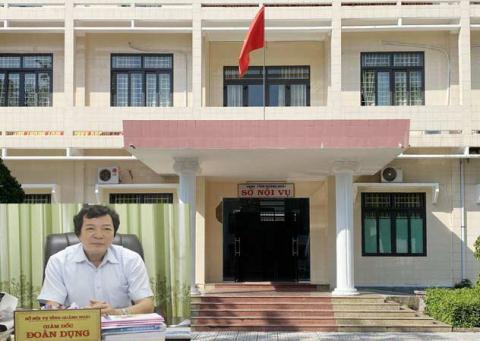 Doan Dung has signed decisions on forcing the four to reimburse the training fee.

The smallest amount of money the department claims is VND2 billion and the highest is VND3.5 billion. The total amount is VND9 billion.

The cases have caught special attention from the public because the individuals are the children of high ranking officials of the province, who must understand the laws and regulations.

Pham Thanh Hai, former head of Quang Ngai Provincial Party Committee Propaganda Department, on April 8 told Dat Viet that he was sad because his daughter, Pham Thi My Hanh, did not return to the province to work for local agencies.

Hanh initially planned to become a lecturer at a university in Quang Ngai province, but she later changed her mind after she successfully applied for a post at a bank.

Hai argues that his daughter will still work and dedicate herself to society, no matter where she works.

His daughter studied at a prestigious school in Australia. Besides the money from the provincial budget, his family also had to pay VND500 million to fund the daughter’s travel and daily needs.

He believes that the provincial Department of Interior Affairs’ decision to force him to pay back 200 percent of fee is unreasonable.

Explaining his decision, Dung said the Department of Interior Affairs is strictly observing the local policy.

He went on to say that the trainees and their families were warned of the punishments they would face if they did not come back to Vietnam and serve at local agencies.

Before they received funding from the provincial authorities, they had to make commitments that they would have to pay 200 percent of the training fees if they broke the commitment.

According to Dung, the policy has been applied in the locality since 2013 and the Department of Interior Affairs is just observing the policy.

“The provincial Party Committee Propaganda Committee and the Department of Information and Communications will hold a public meeting to give official information about the issue,” he said.

Meanwhile, a leader of the Quang Ngai City People’s Committee said his children were paying back the money, step by step.

Minister of Internal Affairs Le Vinh Tan talks about Party and State policies to attract and utilise talents in the public sector.