Let’s take a look at several outstanding construction projects in Hanoi that have contributed to significantly changing the appearance of the capital this year.

Another section of Hanoi Ring Road No 3 opens to traffic 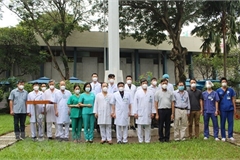