A lack of physical activity and inappropriate diets are to blame for the high rate of obesity among primary school students, according to a new study by the National Institute of Nutrition.

It revealed shortcomings in the nutritional intake and physical activity ofchildren of different ages.

According to the study, primary school students’ dietary intake exceeds therecommended dietary allowance in terms of energy and protein. However, theyhave a low level of physical activity, leading to a high rate of obesity,especially in urban areas.

Meanwhile, intake of secondary and upper secondary school students lagsbehind the recommendation for energy, iron, zinc and various types ofvitamins, resulting in a high rate of malnutrition in lower and secondaryschool students.

The study also points out some factors leading to obesity including age,gender, area, socio-economic status, living conditions and the education levelof parents.

The high number of overweight children can be attributed to an inactivelifestyle and excessive consumption of low nutrition, high-fat foods such asfast food and soft drinks.

Speaking at a workshop held on July 3 to release the study results, deputydirector of the National Nutrition Institute Truong Tuyet Mai said Vietnam wasfacing a dual burden of malnutrition and obesity.

The study found a high rate of malnutrition in rural areas while urbanareas recorded higher rates of obesity.

A survey by the Institute in 2017 showed that the stunting rate for childrenunder 5 was 23.8 percent while the rate of underweight children was at 13.8 percent,meaning one out of every four Vietnamese children under the age of fivewas stunted or malnourished.

"Students make up more than a quarter of the nation's population and theyrepresent the future of the country so it is necessary to have policies andintervention programmes to provide appropriate nutrition for kidsand encourage them to exercise," Mai said.

The institute conducted the study to gain an overview of the nutritionalstatus of students so as to propose appropriate solutions to tackle riskfactors and improve nutrition in the future, helping to improve the healthof Vietnamese people and provide high-quality human resources to contribute tothe development of the country, she said.

Tran Thuy Nga, head of the institute’s Micronutrient Research Department, saidmalnutrition and obesity lead to many diseases such as diabetes, high bloodpressure and some cancers.

She said families, schools and government agencies need to createfavourable conditions for children to have healthy and balanced meals, createplaygrounds for children to exercise and play sports and ensure childrensleep enough each night.

Vietnam has set to reduce childhood malnutrition andthe stunting rate to less than 20 percent and the obesity rate amongadolescents under 12 percent by 2025.-VNA

The police of the southern province of Dong Nai on May 20 decided to start legal proceedings against the deadly wall collapse case at the Giang Dien Industrial Park.

The High-level People’s Court in Ho Chi Minh City on May 20 upheld the verdict handed down at the first-instance trial in a case involving the “manufacturing and trading of counterfeit medicine”.

A new draft law by the Ministry of Transport is aiming to shed some light on Vietnam's traffic problem.

Learning pressure is the biggest concern for children: survey
SOCIETYicon  21/05/2020

A recent survey has found that learning pressure is the biggest challenge children face while staying at home due to the COVID-19 pandemic.

The People’s Committee of Da Nang has asked the two investors behind high-rise projects to change the glass used on the façade of the buildings by the end of this month.

The healthcare system in the Mekong Delta has been steadily expanding and becoming increasingly sophisticated, and the large number of choices available now is helping reduce overcrowding at HCM City hospitals. 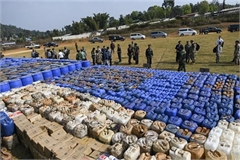 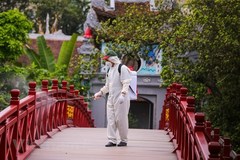