The 16 most expensive universities in Vietnam

Of the 16 universities with the highest tuition fees in Vietnam, five are public schools and 11 are private schools. 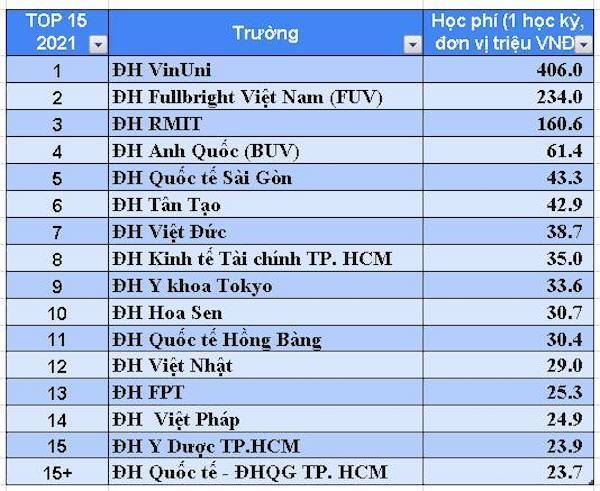 According to Dr Le Truong Tung, chair of the board of directors of FPT University, 16 universities in Vietnam have high tuition fees.

The calculation of tuition fees is made on the basis of data provided by the schools. The tuition is for one semester and does not include other costs applied to Vietnamese students.

For schools which set different tuition fees for different majors and training types, he calculated the average cost per student based on the tuition set for every major, mode of training and enrollment quota. For other schools, he averaged the tuition.

Three schools with the highest tuition fees are all privately run. The most expensive schools are VinUni with tuition of VND406 million per semester, followed by Fulbright Vietnam VND234 million and RMIT Vietnam VND160.6 million.

The tuition of the remaining 13 schools are between VND23.7 million and VND61.4 million.

Here are the 16 schools with the highest tuition fees in Vietnam (in million VND):

Hanoi has set up additional 39 checkpoints to tighten social distancing rules at 15 districts which are reporting high numbers of Covid-19 infections.

The HCM City Department of Health has asked the Medical Examination and Treatment Administration and the Drug Administration of Vietnam to approve the use of Reamberin and Cytoflavin drugs in the treatment of Covid-19 patients.

Hanoi will divide localities into three zones for the application of different COVID-19 prevention and control measures starting from September 6.