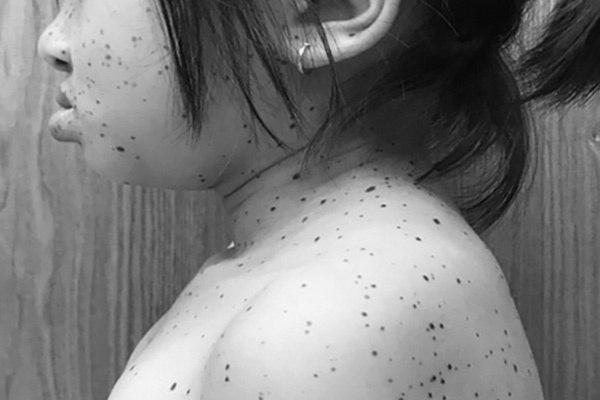 The 8-year-old patient in Tien Giang.

According to the patient’s family, dark-brown stains began appearing all over the face and body of the little girl since she was four. When she was 8 years old, the family brought her to the Ho Chi Minh City Dermatology Hospital for examination. The patient also suffered from congenital deafness and mental retardation. No one in the family had the same disease.

During the examination, doctors noticed that the patient had abnormalities in the jawbone, spine, shoulder, breast, and teeth. These are all typical signs of LEOPARD syndrome.

Because of the disease, the patient is only 105 cm tall and weighs 15 kg. Dark brown spots less than 5mm in diameter are distributed on the face, chest, arms and legs. The lighter brown spots of 2x3cm are on the back.

Genetic analysis performed by the Center for Molecular Biology of the HCMC University of Medicine and Pharmacy identified that the patient suffered from PTPN11 genetic mutations. All of these anomalies are typical of leopard skin syndrome.

According to the HCM City Dermatology Hospital, the first case was recorded in 1936. Only about 200 cases have been reported worldwide so far. In the world, the latest case of leopard syndrome was reported in 2017, a 12-year-old boy in Brazil. In 2015, a 22-year-old female patient was recorded in India.

LEOPARD syndrome is an inherited condition characterized by abnormalities of the skin, heart, inner ears, and genitalia. The acronym LEOPARD describes the features of the syndrome:
(L)entigines - dark spots on the skin
(E)lectrocardiographic conduction defects - abnormalities of the electrical activity of the heart
(O)cular hypertelorism - widely spaced eyes
(P)ulmonary stenosis - obstruction of the normal outflow of blood from the right ventricle of the heart
(A)bnormalities of the genitalia
(R)etarded (slowed) growth resulting in short stature and
(D)eafness.

17-year-old boy has rare condition: heart in right side of chest

A teenager was diagnosed with a completely reversed viscera with the heart located in the right side of the chest. This is a rare condition, with the rate of 1 per 10,000 people.