The route will help increase the number of public transport users and ease traffic congestion. 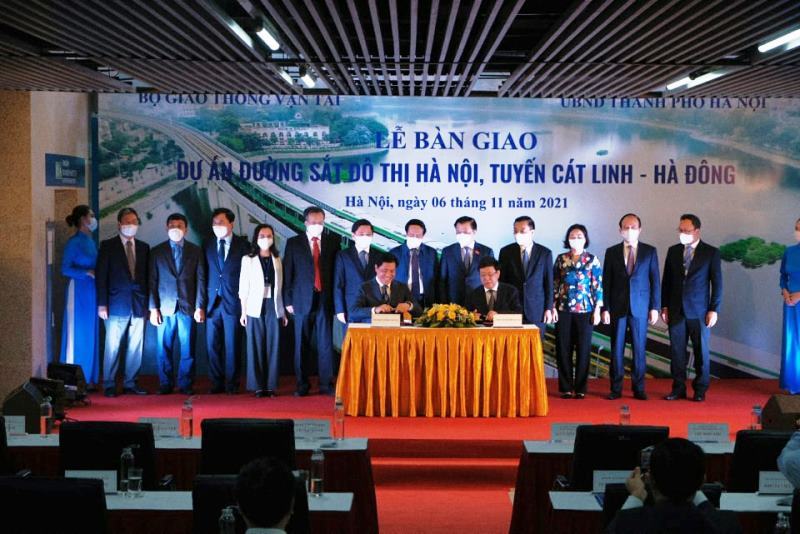 Leaders of the Ministry of Transport and Hanoi sign the minute to hand over Cat Linh - Ha Dong railway project to the municipal authorities. Photo: Quy Nguyen

Speaking at the ceremony of handing over, Vice Chairman of the Hanoi People's Committee Duong Duc Tuan said that the metro line would help increase the number of public transport users, and together with the nine other lines planned, form a key transport network to help ease traffic congestion.

The project is expected to be a game changer for public transportation in a crowded city with millions of personal vehicles, Tuan said, adding that it would help the city’s mass transit network meet up to 45% of demand.

The metro line is connected with 55 public bus routes since last year and the number will rise to 59 in the future, the vice chairman noted.

On November 6 morning, the first train left Cat Linh Station in downtown Dong Da District at 7:40 am for Yen Nghia Station in south-western District of Ha Dong. A full trip on the 13-kilometer elevated track will take 23 minutes after stopping at all 12 stations. 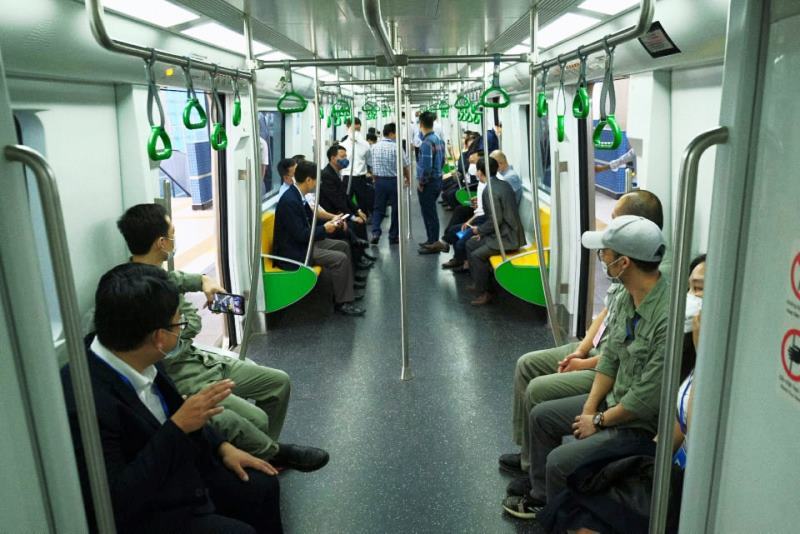 It has an elevated line of more than 13 km with 12 stations and a rolling stock of 13 trains. Each train, whose designed speed is 80 km/h, has four carriages capable of carrying over 900 passengers.

During the trial run of the line, part of a metro line system that will comprise underground sections upon completion, was completed in December 2020, the trains made 5,740 trips covering more than 70,000 kilometers.

In the first week, the service will be from 5:30 am to 8:00 pm every day with a frequency of 15 minutes which will be increased from the second week with interval between trains of 10 minutes.

After six months, the service will be extended to 10:30 pm., and there will be a train every six minutes during rush hour.

Works on the railway, built by China Railway Sixth Group, began in October 2011 and was initially scheduled for completion in 2013. However, several hurdles have stalled it for years.

Its cost increased by 57% from the original estimate to VND18 trillion (US$868 million), with 77% of it coming from official development assistance loans from China.

In January 2021, the French consultant ACT issued a test certificate along with the report, which includes 16 recommendations on risk prevention in the operation of the route, according to the Ministry of Transport.

The French consultant’s recommendations that have been met so far this year, include certification from the Firefighting Police Agency and the consultant’s step-2 safety assessment of the signal system.

The State Council for Acceptance of Construction Projects on October 29 approved the quality assessment results of the metro line, the final step for the project to begin commercial operation.

Hanoi Railway Limited Company, the operator of the project, has met all operational recommendations of the system safety assessment consultant and hired another 82 workers to increase the line’s personnel to 733 workers, according to Vu Hong Truong, the company’s director.

“The Ministry of Transport has worked with Hanoi authorities on meeting the recommendations and the measures to evacuate passengers in emergency situations. For future super-big projects, we must have a roadmap for both investment preparation and human resource training before implementation,” Truong told The Hanoi Times.

The Ministry of Finance (MOF)has advanced $9.83 million from the accumulation fund for debt repayment to pay due debts for the Ministry of Transport (MOT) as the investor of Cat Linh – Ha Dong project.