Vietnam, the second home of a Japanese woman

As the founder of Japanese non-profit organisation Seed to Table, she is dearly described my many Vietnamese people as “a wonderful heart.”

The sincere heart of a Japanese woman

Stepping into the tangerine garden of brothers Tuan and Toan in Xom village, Nam Son commune, Tan Lac district, Hoa Binh province, Mayu Ino was warmly welcomed by the brothers, who gave her enthusiastic hugs like their own sister.

According to Toan, the garden was planted following Mayu’s instructions, which have helped to produce larger volumes and sweeter fruits. Earnings from the garden have even helped the brothers build a new house.

Mayu recalled that 20 years ago, the village was not connected to the national power grid, the road leading to the village was sinking and people lived in poverty. Toan was 12 years old at that time. Although he got excellent academic results at school, his family’s poverty prevented him realising his dream of becoming a doctor.

In 2002, as a coordinator of the Japanese International Volunteer Centre (JIVC), she visited the village every month to provide locals with instructions on farming and breeding.

Recognising that the climate and soil conditions in Nam Son were perfect to grow tangerines, she returned to Japan and invited a Japanese farmer with long experience in the organic farming of citrus fruits to Vietnam to provide training for the Nam Son people.

Since then, tangerines have helped Nam Son residents escape poverty as many local households now gain annual incomes of VND500 million to VND600 million from selling the fruit.

Dinh Van Lung, former Chairman of Nam Son commune People’s Committee said that Mayu has developed a strong attachment to the locality over the past 17 years and has always demonstrated enthusiastic support for local residents.

The Nam Son people are really grateful for her help and see her as their family member, he stressed.

Spreading the seeds of organic agriculture 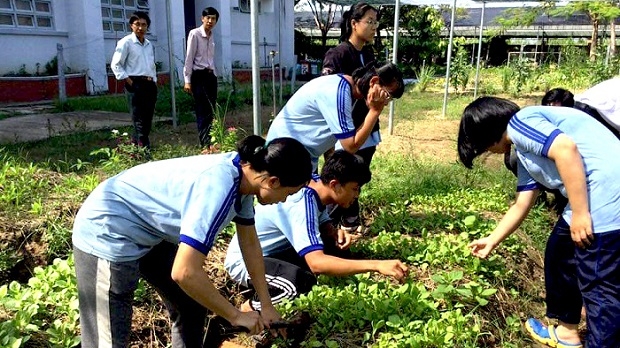 When she first visited Vietnam in 1995, the country’s tranquil countryside and sincere farmers made such an impression on her that she decided to leave Tokyo for Vietnam two years later.

After graduating from university in Vietnam, she didn’t return to Japan but instead worked for the JIVC with the hope of helping Vietnamese farmers change their lives using their potential. During that time, Mayu visited many localities including Son La, Hoa Binh, Hai Phong, Thanh Hoa and Nghe An to implement community development projects.

When JVC closed its Vietnam office in 2009, Mayu wasn’t ready to leave. She turned down her mother’s plea to return to Japan and get married, and instead stayed in Vietnam and set up "Seed to Table" to continue working side by side with the Vietnamese people.

As the Chief Representative of Seed to Table, Mayu has actively mobilised aid from the Japanese government, companies, businesses and benefactors to support Vietnamese farmers.

In 2010, she launched her first project in Ben Tre, a Mekong Delta province where she and her colleagues convinced thousands of households in the three districts of Binh Dai, Ba tri and Mo Cay Nam to adopt clean agricultural practices and establish the Participatory Guarantee System, or PGS, a low-cost quality assurance mechanism that guarantees the quality of agricultural products and has the potential to solidify consumer trust.

Projects launched by Seed to Table have shown their economic efficiency, the organisation has gained increasing trust from leaders and people of many localities including Dong Thap, Vinh Long, An Giang and Tra Vinh.

Mayu is fluent in not only native language of Vietnamese but also ethnic language of Muong people. Whenever she visits provinces, she is always greeted with a warm welcome from the locals and is treated to delicious local specialties. The deep sentiments of the Vietnamese people have kept her in Vietnam for 24 years.

Foreigners who choose Vietnam as their second home