If counting barges and ships, the operational capacity of container ports in Ba Ria – Vung Tau is 78 percent. 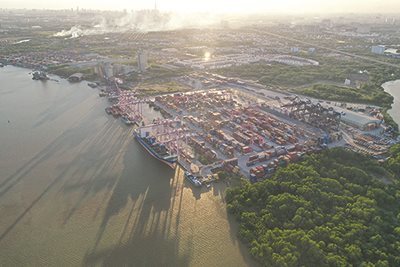 A report about the real volume of goods going through container ports at Cai Mep – Thi Vai Complex in 2019 showed that two ports, TCIT and CMIT, operate beyond the designed capacity.

As such, the delivery of goods from the ports to target ports and ICDs (inland container depots) in HCM City may be delayed. As a result, the two ports hired additional services at the inland waterway of Hung Thai, which increases costs.

The inaccurate view about the capacity excess of Cai Mep – Thi Vai has led to certain consequences in policy design. For many years, agencies tried to redirect the cargo from HCM City ports to Cai Mep – Thi Vai.

Nguyen Hong Linh, Ba Ria – Vung Tau Party Committee Secretary, affirmed the important role of transport projects to connect ports and cargo sources and commented that the implementation of the projects does not meet the requirements.

Linh admitted at a workshop held recently that the province relied too much on the government’s resources, and therefore missed a lot of opportunities.

The view about the capacity abundance of Cai Mep – Thi Vai also has caused investors to remain indifferent to the port complex.

The years 2006 and 2007 witnessed a container port boom in Cai Mep –Thi Vai area with a lot of projects registered by foreign investors, namely Hutchison Ports, PSA Singapre and APM Terminals, and by international shipping lines such as MOL, Wan Hai and Hanjin. However, no new project has been registered since then.

Meanwhile, the complex of ports has been operating at maximum capacity and they need more investment in port, inland wharf and logistic center projects.

Regarding the connection between the complex and goods sources, Linh said that provincial authorities plan to budget VND20 trillion to build a highway and Phuoc An bridge projects to improve connectivity.

However, experts pointed out that the connectivity of Cai Mep – Thi Vai not only depends on projects within Ba Ria – Vung Tau province, but also on projects in other cities and provinces.

Seaports are bearing negative impacts from the COVID-19 pandemic as the major partners of Vietnam are reducing orders. However, experts still see positive prospects.