Broiled pork cooked with coconut juice and duck eggs together with bitter gourd soup are viewed as an unmissable part of the traditional tray in southern Vietnam during Tet (Lunar New Year) holidays - the country’s largest traditional festival. 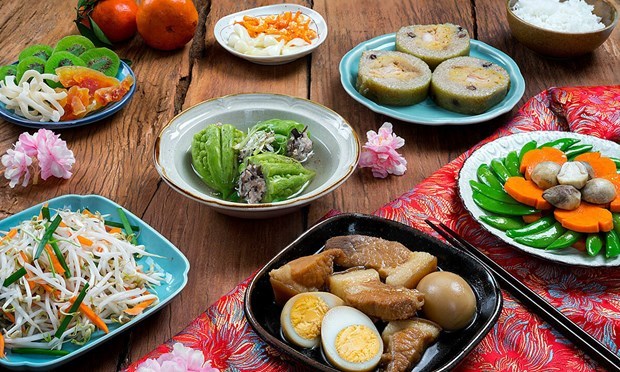 Nguyen Manh Tien, a lecturer and head of the Applied Culture of the International Relations Faculty of the Sai Gon University in Ho Chi Minh City, said that the Vietnamese people in general and in the south in particular, place great importance on Tet trays.

The five-fruit tray must contain those with bright colours representing the five elements of metal, wood, water, fire and earth. Their names must also sound nice and have links with prosperity and happiness.

The same goes to savoury dishes served during the traditional festival, as each dish has a special meaning. Bitter gourd (kho qua in Vietnamese), expresses a wish for a smooth-sailing year and hardships (kho) will be eventually gone (qua).

Before, when there were no refrigerators and going to the markets for food was not as convenient as it is now, each family would cook a huge pot of broiled pork. A small part would be offered to family ancestors and the rest reheated when served and became tastier time after time.

Nicely-chopped pieces of pork and round duck eggs indicate a balance in yin and yang. The egg also represents birth, having many children and a good year, Tien explained.

The two dishes are ‘the soul of the Tet tray for the southerners’, said Nguyen Thi Thien, a resident in Da Kao ward in HCM City’s District 1.

Nguyen Van Khuong from the Mekong Delta province of Tra Vinh said that similar to other southern localities, in addition to the broiled pork and bitter gourd soup, the Tet tray in Tra Vinh include cakes made of rice, mung bean, banana and coconut, among others. Vietnamese of Chinese origin cook their typical dishes such as chicken or duck stew with herbs.

Do Cam Tu in Dong Xoai city of Binh Phuoc southern province said her family will prepare boiled chicken, chicken soup, numerous types of pickles and grilled pork wrapped in rice paper on the occasion. On the third day of the lunar new year, the same dishes will be cooked as offerings to the ancestors and then neighbours will eat together.

Soft outside, crunchy inside