Nguyen Thi Phuong of the Military team successfully defended her title in the women's 50m rifle three positions at the 48th National Shooting Championship in Ha Noi on Monday. 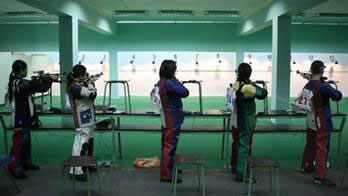 In the men's skeet event, Mai Anh Tuan of Thanh Hoa won a gold medal with 130 points. Nguyen Tuan Anh of Ha Noi and Doan Van Sau of Hai Duong came in second and third with 129 points and 119 points, respectively.

Twenty-six Vietnamese coaches are taking part in a training course run by Achim Ecke from the German National Olympic Committee in a bid to meet international coaching standards.

The course, which is taking place at the National Sports Training Centre in Ha Noi, is set to run until December 13, and is part of a co-operation project between the committee and the Viet Nam Athletics Federation (VAF).

It will provide the attendants with a wide knowledge of athletic events and improve their technical skills in educating and motivating young athletes.

VAF General Secretary Hoang Manh Cuong, speaking on the opening day of the course, said: "Support from international organisations, such as the German committee, helps Vietnamese track and field develop rapidly and will allow us to achieve high results in international tournaments."

Ecke, on behalf of the committee, handed over some sports equipment to VAF representatives. It is the elite trainer's second time training local coaches in Viet Nam, following a spell in 2006.

Le Hung Nam triumphed at the CEO's Open Golf and Life Tournament at the Heron Lake Golf Course and Resort in the northern province of Vinh Phuc.

Nam was presented with a round-trip ticket to play golf in Malaysia, along with accommodations and golf expenses, funded by the Malaysia Tourism Promotion Board.