Uzbekistan women train in VN ahead of AFC U19 qualifiers 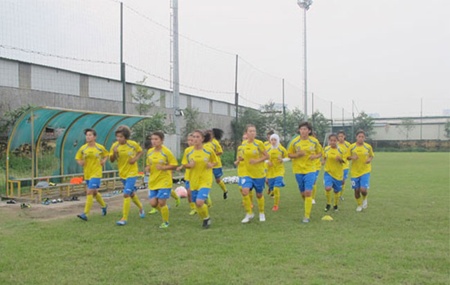 The U19 Uzbekistan team will train in Ha Noi-based Youth Football Training Centre until this Saturday in preparation for the 2015 AFC U19 Women's Championship qualifiers.

The 26-player team coached by SolokhoVyacheslav will have two friendly matches against Viet Nam's U19 squad today and on Friday.

Viet Nam's U19 team is also practising in the venue to prepare for this year's AFF Cup to be held in Thailand on August 16-27.

The 2015 AFC event will attract 14 teams divided into East and West zones during the draw with seeding based 2013 rankings.

The winners from each group will qualify for the finals.

Vietnam is an odds-on favourite to win the ASEAN Football Championship title at the upcoming 2014 AFF Suzuki Cup co-hosted by Vietnam and Singapore.

AFF President Sultan Ahmad Shah made the comment in Hanoi at a preparatory meeting for the AFF Suzuki Cup draw in the capital city on August 5.

Shah highlighted Vietnam’s many advantages, including home field advantage at this year’s tournament and the expert coaching the team is receiving from Japanese Toshiya Miura.

The draw on the afternoon of August 5 will be broadcast live on VTV3 channel. The first draw is to select the five teams to compete in the qualifying round scheduled for Vientiane, Laos on October 8-19.

The second draw is for the final round, set to take place in Vietnam and Singapore from November 22 to December 20.

The Vietnamese men's and women's teams failed to claim a third round win at the World Chess Olympiad in the Norwegian city of Tromso on August 4.

The Vietnamese male team now drops to 16th in the rankings.

The female team was beaten by Armenian rivals 1-3 and currently rank 31st.

In the next round, the Vietnamese male team will meet Paraguay and the female team face off with Malaysian rivals.

The national shooting team has arrived in the Republic of Korea (RoK) for a 20-day training camp in preparation for the upcoming 2014 Asian Games (ASIAD 17) scheduled from Sep 18 to Oct 4 in Incheon.

This year 64 Vietnamese athletes, including 10 shooters, competing at ASIAD 17 are participating in a special competitive eating diet programme.

Vietnam’s best chances for medals at ASIAD 17 lie in shooting, swimming and weightlifting.

Viet Nam will send 18 young martial artists to compete in the Asian Junior Karate Championships in Kuala Lumpur on August 8-11.

The three-day event will see martial artists from about 40 countries and territories, including top competitors Iran, Japan and Kazakhstan, vie for medals.

The championship event will also allow the Vietnamese team to prepare in the lead up to the Asian Games to be held in Incheon, South Korea later this year.

Viet Nam took home only one gold medal from the event last year.

HCM City triumphed in the men's combat event at the National Junior Taekwondo Tournament which concluded in the northern province of Lao Cai on Monday.

On the women's side, the Police took the lead with five golds, one silver and seven bronzes. HCM City and Son La were the runners-up.

In the performance event, HCM City bested An Giang and Binh Thuan to lift the title.

The tournament drew more than 500 athletes aged between 11 and 20 from 38 teams across the country.