Ideas for startups can originate from simple things that can be seen every day. 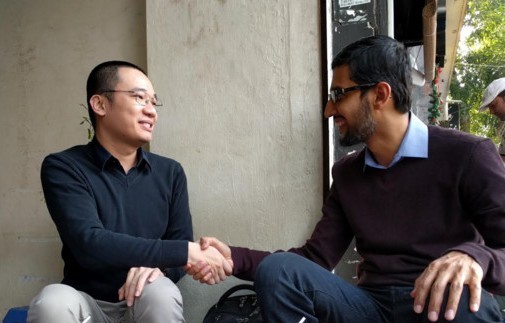 In 2015, Google CEO Sundar Pichai, paid a working visit to Vietnam and had a meeting with Nguyen Ha Dong, the creator of Flappy Bird, a game with a record high number of downloads. The meeting took place at a street tea shop, lasting 30 minutes.

At a later meeting with Vietnamese CEOs during the visit, he said that Vietnam had caught the attention of international businesses and that businesses need to grab the opportunity and reform themselves continuously.

During the one-hour talk, the CEO stressed that the way to success is to focus on the domestic market. Succeeding there first will allow Vietnam’s businesses to reach out to the international market.

Saul Singer, the author of “Start-Up Nation", told the press during a visit to HCM City, that the city was filled with an entrepreneurial atmosphere.

He said people were doing certain types of business on every sidewalk, at every corner, and on every street.

Nguyen Tuan Anh, former CEO of Grab Vietnam, has mentioned how the idea about Grabbike, a motorbike ride-hailing service, came to him.

“In 2015, I saw the flow of motorbikes trailing each day into the city (HCMC) center, about half of them had empty seats behind. I believe that it is wasteful if one person uses a motorbike. This causes traffic jams. Why don’t I develop Grabbike after developing GrabCar,” he said.

Grabbike has been developing well beyond expectations. Almost everyone owns a motorbike and they can become Grabbike drivers to earn money. This is an opportunity for students who want to earn extra money, or unemployed workers. Just one year after Grabbike was launched, the project had attracted tens of thousands of drivers in Hanoi and HCMC.

Many traditional taxi motorbike drivers have also become Grabbike partners because they can get more work and earn more money.

For Nguyen Hoang Trung, the founder and CEO of Lozi, developed a platform that allows people to easily find eatery houses online.

Trung said he could grab the great opportunity as there was no such app at that moment.

Lozi, a platform ranking restaurants, eateries and food, was launched, followed by Loship, a company specializing in providing e-commerce services and delivering goods within one hour.

“When running Lozi, we realized that establishing Loship was inevitable. Startups need to advance forward and improve instead of staying in the same place,” Trung explained.

According to Trung, when starting up, most founders tend to focus on creating products with high quality and believe that only good products will attract customers.

However, it is necessary to understand customers first and then create products that can help solve their problems.

He said entrepreneurs need to be ready to change and adapt to new circumstances. They need to set up targets, observe the market, embrace opportunities, and make quick decisions when necessary.

Startup founders also need to work hard with no day off. Once you take a rest, rivals will surpass you.

Nguyen Huu An, the Vietnam Startup Wheel 2018 Champion, once thought that to start a business, one needed to have good ideas, attract many users, and call for large capital.

But now he thinks more simply. Setting oneself up in business means providing good services, solutions, and products to customers; paying full salaries to workers; and making a profit and developing companies.

Some startups focus too much on spending money to lure more users and expand market share, while forgetting to make money. This leads to financial problems. A startup that is good at spending money but bad at making money is compared to an ‘addict’ who has to sell shares to raise funds.

An believes these startups are vulnerable during Covid-19. When they use up all the money from previous fundraising rounds, they will have to try to call for new capital. Meanwhile, it is more difficult to call for capital during the pandemic. Once they cannot find new capital sources, they will die.

“I find some startups are even worse than female steamed glutinous rice sellers,” he said.

A seller spends 10 dong to make steamed glutinous rice and she collects at least 11 dong from the rice sale so as to have money and continue making the rice for sale the following days.

But many startups take losses continuously and many have disappeared.

“While many startups have had to leave the market, the steamed glutinous rice seller is still prosperous. I think her know-how is delicious glutinous rice and positive cash flow,” he said.

The 2020 E-Conomy SEA Report reported that VNPay has officially become the second Vietnamese technology unicorn, or startup valued at $1 billion or higher. The first one is VNG. The country aims to have five unicorns by 2025 and 10 by 2030.

GoStream, a fast-growing Vietnamese startup that provides multi-platform livestream broadcaster for social sellers, marketers, and content creators, has announced that it has secured a 7-digit USD funding from VinaCapital Ventures.

In the 'new normal', startups could become technology unicorns

Rapid digital transformation will serve as an important driving force for technology firms to become unicorns in the future.