The State Bank of Vietnam adjusted several operating interest rates last week, with the move deemed necessary in the context of a strong USD and increasing domestic pressure on interest rates and exchange rates.

Based on the central bank’s (SBV) decisions, the ceilings for deposit interest rate, discount rate, and refinancing rate have been generally adjusted upwards.

Specifically, the maximum interest rate applicable to demand deposits and deposits with a term from one month to less than six months has climbed from 5 to 6 per cent per year, except for deposits in VND at People’s Credit Funds and microfinance institutions, which increased from 5.5 to 6.5 per cent per year. The interest rates for deposits with a term of six months or more are set by credit institutions based on market capital supply and demand.

In the past two months, the ceiling for a deposit interest rate under six months has returned to the pre-pandemic level and is equivalent to that of 2014. According to Vo Tri Thanh, former deputy director of the Central Institute for Economic Management, raising the operating interest rate is an effective way to tackle a strong USD and inflationary pressure. 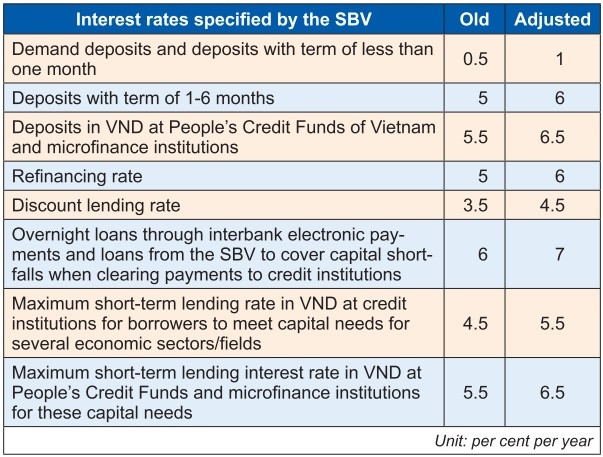 “Interest rates are an important tool to alleviate these pressures,” Thanh said. “The SBV’s job is to always recognise the market’s reaction. This new move comes from realising that pressure on the market was still considerable after the first rate hike.”

However, Thanh noted that it is still too early to confirm that the exchange rate would be stable after this round of adjustment.

“While this is a necessary solution for now, Vietnam is only one country so it will still be subject to many variables that cannot yet be determined,” Thanh said. “To make a sound forecast, we need to look at the global and domestic economic developments in the market over time. The US Federal Reserve also rarely raises interest rates by 1-3 per cent, but only by around 0.75 per cent increments.”

Le Xuan Nghia, a member of the National Financial and Monetary Policy Advisory Council, said that the SBV aims to stabilise the money supply and demand and the volatile exchange rate. Since the beginning of the year, the SBV has had to sell more than 20 per cent of its foreign exchange reserve funds.

“The monetary policy should be in line with the fiscal policy to ensure the ultimate goal, which is to reduce inflationary pressures,” Nghia said.

He proposed that import taxes may also be reduced, adding that the adjustment of operating interest rates will affect the stock market. “This will create a sentiment that deposit interest rates will increase. Investors will see more incentives in saving money than investing in securities,” he said.

A day after the SBV’s decisions were announced, many banks published their new deposit interest rates.

According to VNDirect, deposit interest rates will continue to increase in the near future, likely by 0.3-0.5 percentage points from the current levels by the end of this year.

SSI Research suggested that the rate hike would have a limited impact on annual results for the banking sector, given there were only a couple of months left in the year.

“However, with this rate hike and another possible one in 2023, the NIM would be under larger pressure as both the ceiling for the rate applied to current and savings account has surpassed pre-pandemic levels.”