VietNamNet Bridge – While state-owned commercial banks--the big fish, have been taking slow footsteps, joint-stock banks with many disadvantages in comparison to state-owned banks, have made big leaps to scramble for good clients.

VietNamNet Bridge – While state-owned commercial banks--the big fish, have been taking slow footsteps, joint-stock banks with many disadvantages in comparison to state-owned banks, have made big leaps to scramble for good clients. 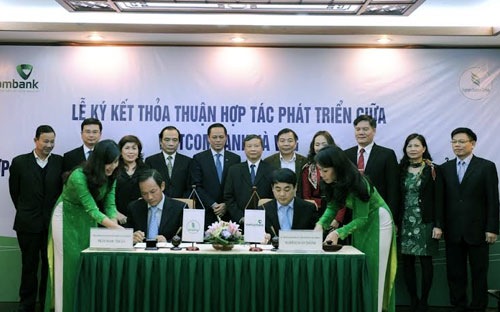 The comprehensive cooperation signing ceremony between Vietcombank and VRG.

Reports and statistics all showed the strong rise of joint-stock banks in recent years.

In 2005, the capital mobilization and lending market shares held by state-owned banks (Vietcombank, Agribank, VietinBank, BIDB and MHB) were both reportedly at 74.2 percent. This means that the market share for joint-stock banks was very modest.

However, the state-owned banks’ market share has been decreasing rapidly since 2006.

By mid-2012, the banks’ capital mobilization market share had dropped to approximately 40 percent, while the lending market share went to 50 percent. This means the bigger part of the cake for joint-stock banks.

In the past, the big investment projects, national key projects or state-owned economic groups and general corporations, by default, were the clients of state-owned banks, which had great advantages in the capital sources and interest rates.

In fact, funding big projects was without the reach of joint-stock banks, which had small capital. Under the current laws, a loan a bank provides to one client must not be higher than 15 percent of the bank’s chartered capital. There was also an unwritten rule that state-owned banks and state-owned enterprises prioritized to use each others’ services.

However, things are getting quite different. In May 2013, SHB, a joint-stock bank, for the first time obtained the right to provide a loan worth VND1.8 trillion to a national key project – the one on expanding the 1A Highway.

SHB’s CEO Nguyen Van Le said that after the merger with Habubank, SHB has got much stronger, which gives it more opportunities to approach to big projects.

Eximbank, also a joint-stock bank, has recently signed two big credit contracts with Vietnam Airlines Corporation worth trillions of dong to fund the airline’s aircraft purchase plan. The national air flag carrier proves to be the most wanted client for banks, which, according to Vietnam Airlines’ CEO Pham Ngoc Minh, has never been late in payment and always been fulfilling its financial duties.

VIB has also signed a credit contract, worth $48 million, with the VIP client.

While other banks complain that it is so difficult to lend capital in the context of the economic downturn, Eximbank has committed to provide a VND1.5 trillion loa to Vimico, a mining company.

Most recently, PVcomBank acted as the lead to arrange a $800 million syndicated loan for the national oil and gas group PetroVietnam. There was no state-owned bank name in the list of the lenders.

State-owned banks might have roused up after joint-stock banks got the right to fund a series of big projects.

On December 12, 2013, the comprehensive cooperation agreement signing ceremony between Vietcombank and the Vietnam Rubber Group (VRG) took place in Hanoi.

VRG strives to export $3bilion worth of products, which makes VRG become a VIP client targeted by many banks. Vietcombank has set up a division specializing in dealing with the works relating to the cooperation.

At the ceremony, a VND750 billion loan to a VRG’s project was inked. Prior to that, similar cooperation agreements were signed with Vietnam Post and the Electricity of Vietnam.