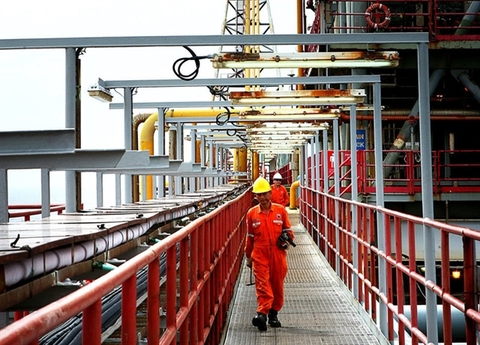 Workers at PetroVietnam carry out technical checks. PetroVietnam is among nineteen State-owned groups and corporations under the Commission for the Management of State Capital at Enterprises (CMSC).

Nineteen State-owned groups and corporations under the Commission for the Management of State Capital at Enterprises (CMSC) expect to incur losses of some VND26 trillion (US$1.1 billion) this year due to the coronavirus crisis.

Their revenues for the whole year were forecast to slump by VND280 trillion compared to the initial target, while their State budget contributions were likely to drop VND33 trillion, according to the Ministry of Planning and Investment (MPI).

In the first quarter of this year, the total revenue of the 19 State groups and corporations fell an estimated VND27 trillion compared to the same period last year.

FDI enterprises were also heavily affected, mainly due to a sharp decline in consumption markets, according to the MPI.

The MPI said 53.8 per cent of FDI enterprises were unable to export in Q1.

“Viet Nam's effective control of the COVID-19 pandemic has helped limit the spread of the disease in the community,” said Minister of Planning and Investment Nguyen Chi Dung.

“This will help restore confidence among investors in the Vietnamese market and create opportunities for the economy to recover,” Dung said.

Dung also pointed out some potential risks that businesses must be aware of, which included the complicate developments of COVID-19, especially in countries that are important markets for Viet Nam such as the US, Japan and Europe.

“Therefore, the discontinuity of the supply chain and value chain will not be settled the near future and will continue to exert great influence on enterprises, especially those with inputs and outputs heavily dependent on international markets and deeply involved in global value chains such as textiles, footwear, tourism, aviation, restaurants, hotels and logistics,” Dung said.

“As a result, many restaurants and hotels have been put up for sale during this difficult time.”

According to the MPI, if the pandemic became more complicated, there would be more mergers and acquisitions. Businesses with certain market shares may be swallowed by foreign investors.

After the pandemic, large FDI enterprises were likely to restructure the system of raw material providers, selecting new investment locations meeting their requirements for science, technology and biological environment and healthcare services.

This would be a challenge for Viet Nam in the future, the MPI said. — VNS