Following the success of MekoStem, which is considered the first stem cell bank in Vietnam, some more banks would be set up to satisfy the increasingly high demand from the rich people.

VietNamNet Bridge – Following the success of MekoStem, which is considered the first stem cell bank in Vietnam, some more banks would be set up to satisfy the increasingly high demand from the rich people. 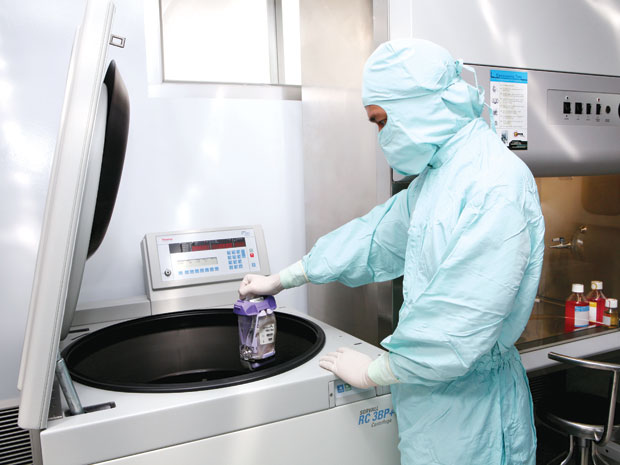 MekoStem, after four years of operation, has received over 1000 stem cell samples for storage to the orders of individual clients.

According to Truong Thi Thu Huyen, Deputy Director of MekoStem, stem cell is the cell capable to develop into specialized cells to form different tissues, organs in the body which can replace the issues and the organs lost due to aging, death or injured.

Therefore, stem cells can be used to create new cells to replace the spoiled cells or the cells which have lost the initial functions, thus bringing the high hope to treat incurable diseases.

Phu Chi Dung, Director of the HCM City Hospital of Hematology and Blood Transfusion, said stem cells have been used to treat malignant diseases in Vietnam over the last many years. There are three sources of stem cells, including bone marrow, peripheral blood and umbilical cord, of which cord blood is more preferable.

As such, if the umbilical cord blood is left at stem cell banks, it would be used later to treat the children who unluckily suffer dangerous diseases. Besides, the stem cells can also be use in the treatment for the other members of the same families.

Experts call the storage of umbilical cord stem cells a kind of “biological insurance.” In the future, if people suffer incurable diseases, stem cells would be useful in the treatment process.

In 2012, the Central Children’s Hospital reportedly successfully cured a child who suffered a fatal disease with the method of stem cell transplantation.

Huyen said that at that time, the hospital asked MekoStem and the HCM City Hospital of Hematology and Blood Transfusion to find suitable umbilical cord blood from donors. However, it was unfeasible because of the modest sources of donated umbilical cord blood.

According to Huyen, in principle, the hospital cannot use the stem cells from clients, while there were only 200 donated blood samples. Only two or three suitable samples can be found in every 10,000 samples.

However, it was lucky enough that the child was then treated with the stem cell from bone marrow.

The demand for stem cell storage at banks has been increasing rapidly. NXT, 42, in Binh Tan district of HCM City, said he has signed a contract with MekoStem on storing the umbilical cord stem cell for his second child, who would be born in some more days.

“I have heard that umbilical cord stem cells can bring the opportunities of treating fatal diseases. Therefore, I think that it would be better to store the stem cells, in case my child needs them later,” he said.

In order to have stem cells stored at MekoStem, clients would have to pay the fee of 41 million dong in the first year, and 3 million dong a year for the next 17 years.

The fees seem to be high to many people. However, this is not a big sum of money to high income earners.

The Central Children’s Hospital in Hanoi is also moving ahead with the plan to set up the first bank of stem cell in the north.