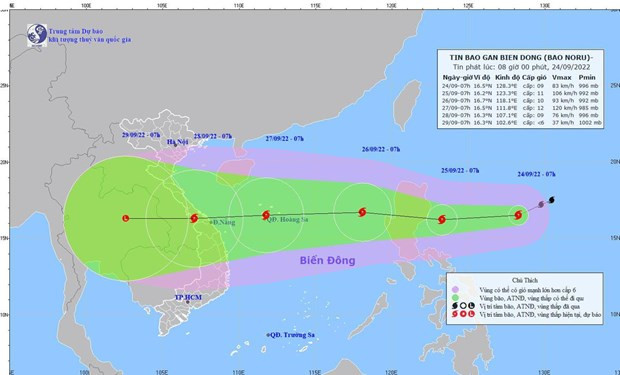 The path of the storm. (Source: nchmf.gov.vn)
The National Centre for Hydro-Meteorological Forecasting has predicted that storm Noru will enter the East Sea on September 25 evening, and recommended coastal localities to brace themselves for the storm.

According to the NCHMF’s forecast, the severe tropical storm will make its landing in the East Sea with a wind power at levels 9 and 10 and gusts at level 13, tending to get stronger.

On September 27 and the morning of September 28, the storm made landfall in the central region with winds near the center of the storm ranging between levels 10 and 11, and gusts at level 14.

Due to Noru’s influence, from noon and afternoon of September 25, the areas in the north and the middle of the East Sea will experience strong winds of up to levels 6 and 7. The area near the center of the storm will see its strong wind at levels 8 and 9 and gusts at level 11.

The north central region will have heavy rains with a rainfall from 100 to 200mm on the day and more rains in following days.

Localities from Quang Ninh in the north to Binh Thuan in the central region received a dispatch on September 24 requesting them to prepare for the storm.

The preparation included tightly managing vessels leaving the shore and those operating at sea, getting save and rescue forces and equipment ready, launching measures to protect houses and public facilities, and ensuring the safety of sea dykes, among others.
Source: VNA