VietNamNet Bridge - The State Bank of Vietnam reports that loans disbursed to the real estate sector have soared recently.

VietNamNet Bridge - The State Bank of Vietnam reports that loans disbursed to the real estate sector have soared recently. 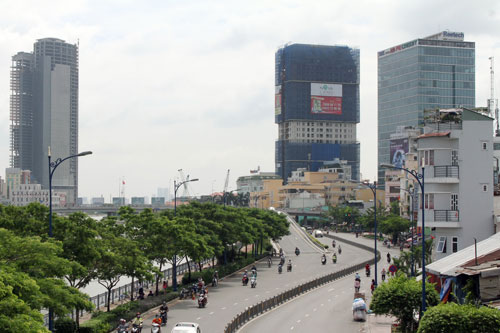 Deputy Governor of the State Bank of Vietnam Nguyen Thi Hong, at a meeting held by the bank recently, said that real estate credit in the first six months of 2015 had increased by 10.89 percent compared to the same period last year.

Loans for real estate accounted for 8.3 percent of total outstanding loans, up by 7.9 percent compared with the same period last year.

The capital had been provided mostly to fund building of houses for sale and lease.

In 2010, the real estate sector was listed as a ‘non-production sector’ to which banks were discouraged to lend.

However, in April 2012, the real estate sector was lifted from the ’non-production sector’. Since then, lending to the sector has escalated.

Do Thien Anh Tuan, a lecturer with the Fulbright Economics Teaching Program (FETP), said signs in the market indicate that a price fever could occur in three to four years.

He urged management agencies to prevent this from occurring.

HCM City’s outstanding loans provided to the property sector now account for more than 50 percent of real estate credit of the entire country, while the non-performing loan ratio is over 5 percent.

The ratio once reached 7 percent in the past. The State Bank has decided that the figure must be lowered to 3 percent by the end of 2015.

The deputy general director of a joint stock bank said he was always cautious about approving loans related to real estate.

“In the past, banks easily provided loans. But that period is over,” the banker said.

Minh said ‘price fever’ in the real estate market would not occur thanks to the strict policies laid down recently.

Since April 2012, the State Bank has been setting credit growth rates for every commercial bank to ensure a reasonable lending growth rate of 10 percent annually in the banking system.

The amended Real Estate Business Law expected to take effect on July 1 stipulates that investors must receive a guarantee from commercial banks when they launch their real estate products on the market.